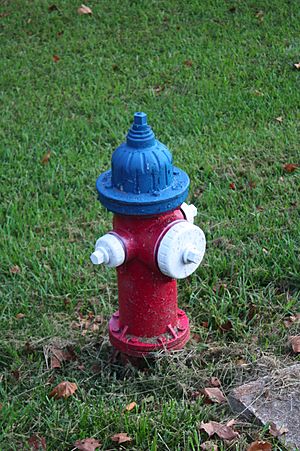 A fire hydrant, also known as a fire plug or johnny pump, is a tool used for fighting fires. They are usually found easily on streets, stuck to the road. The first fire hydrant recorded was in Philadelphia. 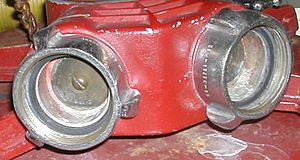 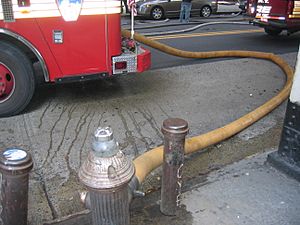 The user attaches a hose to the fire hydrant, then opens a valve on the hydrant to provide a powerful flow of water, on the order of 350 kPa (50 pounds per square inch gauge (psig)) (this pressure varies according to region and depends on various factors including the size and location of the attached water main). This user can attach this hose to a fire engine, which can use a powerful pump to boost the water pressure and possibly split it into multiple streams. One may connect the hose with a threaded connection, instantaneous "quick connector" or a Storz connector. A user should take care not to open or close a fire hydrant too quickly, as this can cause a water hammer, which can damage nearby pipes and equipment. The water inside a charged hose line causes it to be very heavy and high water pressure causes it to be stiff and unable to make a tight turn while pressurized. When a fire hydrant is unobstructed, this is not a problem, as there is enough room to adequately position the hose.

Most fire hydrant valves are not designed to throttle the water flow; they are designed to be operated full-on or full-off. The valving arrangement of most dry-barrel hydrants is for the drain valve to be open at anything other than full operation. Usage at partial-opening can consequently result in considerable flow directly into the soil surrounding the hydrant, which, over time, can cause severe scouring. Gate or butterfly valves can be installed directly onto the hydrant orifices to control individual outputs and allow for changing equipment connections without turning off the flow to other orifices. These valves can be up to 12 inches in diameter to accommodate the large central "steamer" orifices on many US hydrants. It is good practice to install valves on all orifices before using a hydrant as the protective caps are unreliable and can cause major injury if they fail.

When a firefighter is operating a hydrant, he or she typically wears appropriate personal protective equipment, such as gloves and a helmet with face shield worn. High-pressure water coursing through a potentially aging and corroding hydrant could cause a failure, injuring the firefighter operating the hydrant or bystanders.

In most jurisdictions it is illegal to park a car within a certain distance of a fire hydrant. In North America the distances are commonly 3 to 5 m or 10 to 15 ft, often indicated by yellow or red paint on the curb. The rationale behind these laws is that hydrants need to be visible and accessible in an emergency.

All content from Kiddle encyclopedia articles (including the article images and facts) can be freely used under Attribution-ShareAlike license, unless stated otherwise. Cite this article:
Fire hydrant Facts for Kids. Kiddle Encyclopedia.