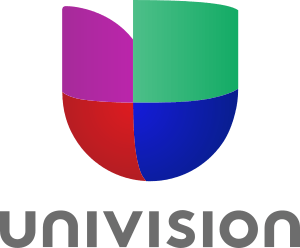 The Official Logo for Univision Since January 29, 2019

Univisión is one of the largest Hispanic television channels in the United States.

It was founded by the largest media company in Mexico (now known as Grupo Televisa) as a means to spread Spanish programming in the United States. Univision has grown to be the largest Spanish-language media outlet in the U.S. Its daily news program Noticiero Univisión, co-anchored by Jorge Ramos and María Elena Salinas, has in several occasions outdone (in number of ratings) major English-language network evening news programming such as CBS, NBC, and ABC's World News Tonight.

Univisión and Telemundo USA have been competing for the top spot among Hispanic viewers for many years, often imitating each other's programming.

In 2013, Univision and ABC News announced that they were to become partners and will form a new channel called Fusion. Fusion will show English news for Hispanic audiences. The channel began broadcasting on October 28, 2013.

All content from Kiddle encyclopedia articles (including the article images and facts) can be freely used under Attribution-ShareAlike license, unless stated otherwise. Cite this article:
Univision Facts for Kids. Kiddle Encyclopedia.