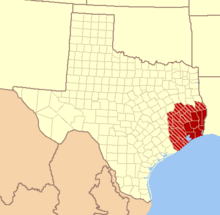 Regional definitions vary from source to source. The counties shown in dark red are usually included, while all or portions of the striped counties may or may not be considered part of Southeast Texas. Wharton and Matagorda counties are included, also.

Southeast Texas is a sub-region of East Texas. It is geographically centered on the Greater Houston and Beaumont–Port Arthur metropolitan areas.

Southeast Texas includes part of the coast of the Gulf of Mexico and most of the Texas portion of the Intracoastal Waterway. The area is also crossed by numerous rivers and streams, the largest being the Sabine River, the Neches River, and the Trinity River. The only large bodies of water in Southeast Texas are Galveston Bay and Sabine Lake, but the large reservoirs of East Texas are just to the north.

Near the coast, the land is low and extremely flat, and often marshy. The Piney Woods extend into the northern parts of Southeast Texas, reaching as far south as the rice paddies and marshlands that lie between Houston and Beaumont. The highest point on the coast is at High Island, where a salt dome raises the elevation to around 40 feet (12 m).

Away from the coast, the terrain begins exhibiting the rolling hills of East and Central Texas. Toward Central Texas, the mixed pine and hardwood forests give way to East Central Texas forests of post oak and grasslands.

The Golden Triangle is an area of extreme Southeast Texas near the Louisiana border. The "triangle" is formed by Beaumont, Port Arthur, and Orange, which are the largest cities in the area. The "golden" refers to the wealth that came from the Spindletop oil strike near Beaumont in 1901.

In an attempt to distance the area from the petrochemical industry, some area interests attempted to rename the Golden Triangle the "Triplex." This name change did not catch on, and area residents still refer to it as the Golden Triangle.

Some residents of the Golden Triangle do not consider the Greater Houston area as being part of Southeast Texas and place the western boundary of the region approximately at the Trinity River, which is roughly 30 miles from Downtown Houston. 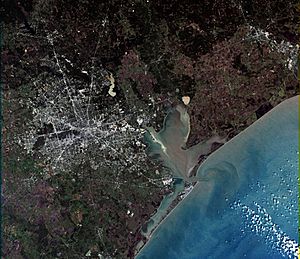 The Big Thicket is an area of dense forest located in the area just north and northwest of the city of Beaumont. Many small towns make up the area, including Woodville and Kountze.

The Big Thicket National Preserve protects part of the old thicket, highlighting the area's biological resources. The 97,000 acre (390 km²) preserve boasts a varied ecology of piney woods, swamps, and coastal prairies. It includes extremely diverse plant species including orchids, cactus, cypress, and pine in close proximity to each other. Approximately 65,000 people visit this area each year.

Galveston Bay is a large estuary located along Texas's upper coast. The bay is fed by the Trinity River and the San Jacinto River, numerous local bayous and incoming tides from the Gulf of Mexico. The bay covers approximately 600 square miles (1,500 km²), and is 30 miles (50 km) long and 17 miles (27 km) wide. Galveston Bay is on average 7–9 feet (3 m) deep. The bay has three inlets at the Gulf of Mexico: Bolivar Roads (the exit of the Houston Ship Channel) between Galveston Island and the Bolivar Peninsula, San Luis Pass to the West, and Rollover Pass to the East.

The Houston Ship Channel, connecting the Port of Houston to the Gulf, passes through Galveston Bay. Houston is the largest city on the bay, while smaller ones include Galveston, Pasadena, Baytown, and Texas City. The bay provides nursery and spawning grounds for large amounts of marine life, and is important for both commercial and recreational fishing.

Compared to the rest of the state, Southeast Texas's climate is warmer in the winter and cooler in the summer. On average, the region is the wettest part of the state. The relatively mild and wet climate is largely due to the influence of the Gulf of Mexico. Average annual rainfall in the Golden Triangle is 60 inches (1500 mm). Rainfall totals in other parts of Southeast Texas are lower, but still in excess of 40 inches (1000 mm) per year. During Tropical Storm Claudette in 1979, the city of Alvin recorded an official 24-hour rainfall total of 42 inches (1067 mm) — the highest one-day rainfall total ever measured in the United States.

Houston has been called the "Lightning Capital of Texas," as it has a higher density of lightning strikes than the rest of the state. This area of unusually high lightning activity stretches from Houston eastward into Southwest Louisiana. Much of this can be explained by the natural occurrence of thunderstorms in the region, which form almost daily during the summer months. However, the unusual clustering of lightning around the developed areas of Houston, the Golden Triangle, and Lake Charles, Louisiana have led many researchers to believe that some combination of urban heat islands and air pollution are responsible for increasing the number of lightning strikes beyond their already high natural levels. 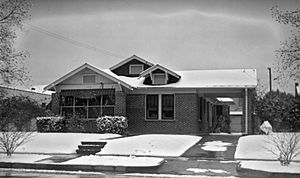 Southeast Texas is vulnerable to hurricanes, and has been struck and affected by major hurricanes like Hurricane Rita in 2005, and Hurricane Ike which passed over much of Houston and surrounding areas in 2008. Weaker storms strike the area routinely, and some, like Tropical Storm Allison and Tropical Storm Claudette, have caused considerable damage.

In the urban areas of Southeast Texas, oil, energy, healthcare, manufacturing and technology are prominent industries. Houston is the largest city and economic center of Southeast Texas, and it holds the second most Fortune 500 headquarters within the city limits after New York City. Major corporations in the region include Sysco, APA Corporation, Chevron Corporation, HostGator, and JPMorgan Chase.

Outside of the cities, agriculture, tourism and small business have always been major factors in the economy.

All content from Kiddle encyclopedia articles (including the article images and facts) can be freely used under Attribution-ShareAlike license, unless stated otherwise. Cite this article:
Southeast Texas Facts for Kids. Kiddle Encyclopedia.