Baytown is a city in the U.S. state of Texas, within Harris and Chambers counties. Located in the Houston–The Woodlands–Sugar Land metropolitan statistical area, it lies on the northern side of the Galveston Bay complex near the outlets of the San Jacinto River and Buffalo Bayou. It is the sixth-largest city within this metropolitan area and seventh largest community (including The Woodlands CDP). Major highways serving the city include State Highway 146 and Interstate 10. At the 2010 U.S. census, Baytown had a population of 71,802, and it had an estimated population of 78,393 in 2021.

The area of Baytown began to be settled as early as 1822. One of its earliest residents was Nathaniel Lynch, who set up a ferry crossing at the junction of the San Jacinto River and Buffalo Bayou. The ferry service that he started is still in operation today, now known as the Lynchburg Ferry. Other early residents of Baytown include William Scott, one of Stephen F. Austin's Old Three Hundred, and Ashbel Smith, who owned a plantation in the area. One of Baytown's first babies born was Gertrude Gardner.

The city now known as Baytown was originally three separate towns. The first of these was Goose Creek, named for the bayou of the same name where Canada geese wintered and whose name is still reflected in the area's Goose Creek school district, whose establishment dates back to before 1850. With the discovery of the Goose Creek Oil Field, the rival communities of Pelly in the late 1910s, and East Baytown in the early 1920s, developed as early boomtowns. The "East" in East Baytown was later dropped because it was west of Goose Creek.

Serious talk of merging the three cities began shortly after World War I, but the community of Baytown was opposed to this idea. However, in 1947, the three cities finally agreed to consolidate. The citizens settled on the name Baytown for the new combined city. Baytown as it is known today was officially founded January 24, 1948.

In 1916, the Humble Oil and Refining Company, founded by one-time Texas governor Ross S. Sterling and his associates, in developing the Goose Creek Oil Field, built the first offshore drilling operation in Texas and the second in the United States. The company later built the Baytown Refinery, which would become one of the largest Exxon refineries in the world. Since then, many other refineries have been built in the area. Exxon-Mobil is still one of the major employers in the city and now runs over 10 plants in the area.

Following the discovery of oil nearby, the population of Baytown and the Tri-Cities boomed. Many immigrants arrived in Baytown, among them a number of Jewish families who founded a synagogue, K’nesseth Israel, in 1930.

Steel manufacturing in Baytown began in 1970 when United States Steel opened the Texas Works near the city. The plant was officially closed in July 1986, due to a poor economic climate and the decline of American steel in the 1980s. The mill was later purchased by Jindal Steel and now operates as JSW Steel USA, Inc.

Baytown connects to I-10 via Highway 146, and the Fred Hartman Bridge connects southwest to La Porte.

Baytown is located at the mouth of the San Jacinto River on Galveston Bay, 26 miles (42 km) by road east of Houston.

Baytown is located on the Gulf coastal plain, and its vegetation is classified as temperate grassland and marshes. The municipalities have been built on reclaimed marshes, swamps, and prairies, which are all still visible in undeveloped parts of the Bay Area. Baytown is bordered by water on three sides. Along the south and west is Galveston Bay. On the east is Cedar Bayou. The city is roughly bordered along the north by Interstate 10. Portions of the city to the east of Cedar Bayou lie in Chambers County.

Flatness of the local terrain and proximity to the bay have made flooding a recurring problem for the area.

The land beneath Baytown consists of layers of sand and clay to great depths. These layers were created by millennia of river-borne sediments which gradually incorporated plant and animal matter, creating the petroleum deposits for which the Gulf Coast is now known.

The region around the city has numerous faults, many considered active, but none has produced significant earthquakes in recorded history. These faults tend to move at a smooth rate in what is termed "fault creep", which reduces the risk of an earthquake. The one significant earthquake that has been reported in the area was the result of an underground water and petroleum extraction.

Baytown's climate is classified as humid subtropical (Cfa in Köppen climate classification system). Spring supercell thunderstorms sometimes create tornadoes (but not to the extent found in tornado alley). Prevailing winds from the south and southeast bring heat from the deserts of Mexico and moisture from the Gulf of Mexico.

Summer temperatures typically have highs near 90 °F (32 °C) though higher temperatures are not uncommon. The city's proximity to the bay and the winds that it generates moderate the area's temperatures and ease the effects of the humidity, creating a more pleasant climate than inland communities like Houston. Winters in the area are temperate with typical January high of 61 °F (16 °C) and lows are near 42 °F (6 °C). Snowfall is rare. Annual rainfall averages exceed 53 inches (130 cm).

Excessive ozone levels can occur due to industrial activities; nearby Houston is ranked among the most ozone-polluted cities in the United States. The industries located along the ship channel and the bay are a major cause of the pollution.

Hurricanes are a substantial concern during the fall season. Though Galveston Island and the Bolivar Peninsula provide some shielding, Baytown still faces more danger than Houston and other inland communities, particularly because of storm surge, as well as severe land subsidence in some low-lying areas of town due to excess pumping of groundwater in the 1960s (see Brownwood subdivision) by area refineries and municipalities. Hurricanes Carla (1961), Alicia (1983), and Ike (2008) were the three most damaging hurricanes to affect Baytown.

Of the 2010 population, 39.2% had children under the age of 18 living with them, 52.9% were married couples living together, 14.2% had a female householder with no husband present, and 27.5% were not families. About 23.0% of all households were made up of individuals, and 8.0% had someone living alone who was 65 years of age or older. The average household size was 2.80 and the average family size was 3.32. The 2019 American Community Survey estimated the average family size declined to 2.83.

Christianity is the most prevalent religion in Baytown and the Greater Houston area. The Latin Church's Archdiocese of Galveston-Houston of the Catholic Church is the largest Christian body in the city, followed by Baptists of the Southern Baptist Convention and Texas Baptists, the Assemblies of God USA, and United Methodist Church. Other prominent religions include Judaism and Islam.

The Baytown Little Theater is a community theater in Baytown run entirely by volunteers. The theater has been in operation for 55 years (as of 2015) and is one of the longest continuously running community theaters in Texas. The theater typically produces six shows each year from September to August, with each show giving seven performances. 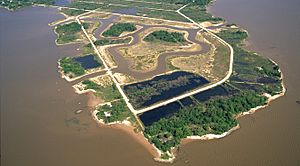 Baytown Nature Center, located on a 450-acre (1.8 km2) peninsula along the Houston Ship Channel and surrounded on three sides by Burnet Bay, Crystal Bay, and Scott Bay, is both a recreation area and a wildlife sanctuary that is home to hundreds of bird species, mammals, reptiles, and aquatic species.

San Jacinto Mall is a large regional shopping mall located in Baytown along Interstate 10. It is currently managed by Triyar Cannon Group. The mall has five anchor stores, a food court and Premiere Cinemas 11, although much of the mall's leasable space is unused.

The Baytown Symphony Orchestra, in residence at Lee College, performs several concerts throughout the year for the enjoyment of the public.

The Baytown Sun serves as the region's newspaper.

The centerpieces of Baytown's economies are three industrial districts the city has created, all outside the city limits but within its extra-territorial jurisdiction. These districts primarily support petroleum and petrochemical processing. The anchors of the business community are ExxonMobil, Covestro, and Chevron Phillips. The ExxonMobil Baytown Complex, founded in 1919, is one of the world's largest industrial complexes. The Baytown Refinery located there is the largest in the United States. The Covestro (former Bayer MaterialScience) Baytown Industrial Park is the largest of Covestro's U.S. chemical processing sites producing a variety of petrochemical products. The Cedar Bayou plant, in operation since 1963, is Chevron Phillips Chemical's largest manufacturing site in the United States. It is a newer and growing industrial district which is quickly acquiring new tenants such as Jindal Steel and Power Limited and Samson Controls.

Stallworth Stadium is the home for varsity football and soccer for GCCISD as well as for the annual Bayou Bowl. The stadium seats approximately 16,000 fans, making it one of the largest high school sports venues in the nation. It recently underwent a press box renovation in 2009, as well as an innovation in 2006 when artificial turf and a huge scoreboard were installed. On a campaign stop for the 1976 presidential election, President Gerald Ford attended a Robert E. Lee High School fall football game. 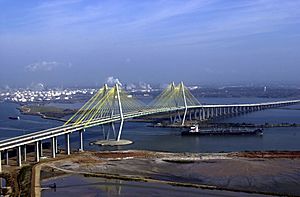 The Fred Hartman Bridge, which connects Baytown to La Porte

Baytown is linked to Interstate 10 (see map) by State Highway 146 (Lanier Freeway) and Spur 330 (Decker Drive). It is also linked by the Fred Hartman Bridge, which crosses into the city from nearby La Porte; the bridge was built in 1995, replacing the Baytown Tunnel, to allow a deeper ship channel.

All content from Kiddle encyclopedia articles (including the article images and facts) can be freely used under Attribution-ShareAlike license, unless stated otherwise. Cite this article:
Baytown, Texas Facts for Kids. Kiddle Encyclopedia.