When La Porte celebrated its centennial in 1992, it was the home of Barbours Cut Terminal, operated by the Port of Houston Authority since 1977. Fifteen years later, the Port of Houston's newest addition, Bayport Terminal, was established just south of La Porte. The area around La Porte has served an increasingly important role in international trade since the 1970s.

The area around modern La Porte gained fame early in Texas history as the location of the Battle of San Jacinto on April 21, 1836, which ended the Texas Revolution, establishing the independence of the Republic of Texas from Mexico. The San Jacinto Monument, in the unincorporated area of La Porte, commemorates the battle. During the early 20th century, particularly the 1920s and 1930s, La Porte's Sylvan Beach became a nationally known tourist destination attracting some of the nation's most well-known entertainers. As a result of changing economics in the Houston area and beach erosion, the tourist business declined while industrial development in the area grew. During World War II and afterward, La Porte's economy rapidly shifted toward petroleum/petrochemicals and shipping, which developed as the dominant industries in the Pasadena-Baytown area. 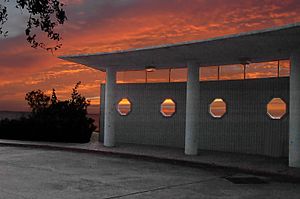 Sunrise at the Sylvan Beach Pavilion
For more details, see History of the Galveston Bay Area

The community of La Porte was founded in 1892 as a speculative real estate venture by an investment group. A 22-acre (0.089 km2) public space known as Sylvan Grove was reserved by the waterfront. The area around Sylvan Grove soon was developed with amenities including bathhouses, boating piers, and a Victorian hotel with a dance pavilion. La Porte quickly became the most popular tourist destination in the Houston area. Sylvan Grove Park was acquired in 1896 by a company known as Adoue and Lobit and renamed Sylvan Beach. Cottage retreats were built around the waterfront.

In 1900, the devastating Galveston Hurricane hit the shoreline, seriously damaging the community's attractions. As the Texas Oil Boom took hold beginning in 1901, and neighboring Houston became home to many wealthy businessmen, La Porte quickly rebuilt and re-established itself as a tourist center. It was, however, damaged again by a major fire and another hurricane in 1915. The community rebuilt again.

During the 1920s and 1930s Sylvan Beach Amusement Park became a nationally recognized destination, featuring beauty contests and regular performances by famous bands, in addition to a growing gallery of amenities. Some of the most well-known performers of the era, including Guy Lombardo, the Dorsey Brothers, Phil Harris, and Benny Goodman, appeared at the park. In the 1930s the park was completely revamped, with additions of a large boardwalk, amusement rides, and many other attractions. The residential community remained small, supported exclusively by Sylvan Beach tourism and the nearby Bay Ridge community, an area of beachfront summer homes in neighboring Morgan's Point built by wealthy Houstonians.

The beachfront began to physically shrink beginning around 1928 because of erosion from the wakes of shipping traffic, and land subsidence resulting from the extraction of groundwater in the area due to development. Gas rationing in World War II slowed tourism. A hurricane in 1943 destroyed most of the tourist attractions. Most of the damaged structures at Sylvan Beach were never rebuilt after this time, as the area was changing, and La Porte's tourist industry rapidly declined. By the later 20th century, erosion had completely eliminated the beach.

As shipyards and industrial plants in World War II were developed in nearby communities such as Pasadena, Baytown, and Deer Park, the community's residents became more dependent on these businesses. The opening of the La Porte-Baytown tunnel in 1954 further spurred development. The later establishment of the Johnson Space Center in the nearby Clear Lake Area, the Barbours Cut shipping terminal in neighboring Morgan's Point, and the Bayport Industrial District within La Porte's jurisdiction have gradually made the community successful as part of the Houston area's industrial heartland.

Much of the history of La Porte's glory years as a tourist haven has been preserved by the La Porte Bay Area Heritage Society. Plans have been discussed for many years to restore La Porte's status as a tourist destination. A project to restore the beachfront at Sylvan Beach Park began in 2009 and finished in 2013, with sand brought in from other areas and dredging operations. Other plans, including building a large hotel on the shoreline, have been discussed as well.

The climate in this area is characterized by hot, humid summers and generally mild to cool winters. According to the Köppen Climate Classification system, La Porte has a humid subtropical climate, abbreviated "Cfa" on climate maps.

La Porte contains many communities. Lomax was once a separate jurisdiction but was annexed by La Porte. 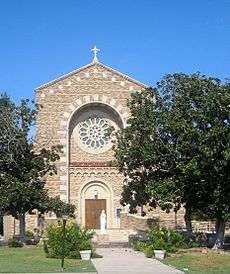 The area is zoned to the La Porte Independent School District, including La Porte High School.

The city is served by the 23,357-square-foot (2,169.9 m2) La Porte Branch Library of Harris County Public Library (HCPL), located at 600 South Broadway. The library first opened in 1929. The City of La Porte maintains the buildings and furnishings while HCPL staffs and operates the library.

La Porte is linked to Interstate 10 (see map) by State Highway 146, crossing the Fred Hartman Bridge into the nearby city of Baytown; the bridge was built in 1995, replacing the Baytown Tunnel, to allow deepening of the Houston Ship Channel.

La Porte is located on the northwest end of Galveston Bay at the mouth of Buffalo Bayou and the San Jacinto River.

All content from Kiddle encyclopedia articles (including the article images and facts) can be freely used under Attribution-ShareAlike license, unless stated otherwise. Cite this article:
La Porte, Texas Facts for Kids. Kiddle Encyclopedia.