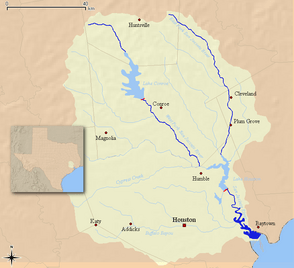 Map of the San Jacinto River and associated watershed 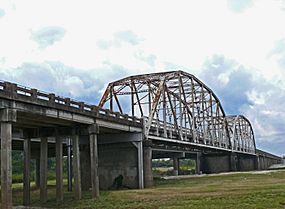 The San Jacinto River ( san-_-jə-SIN-toh) runs from Lake Houston in Harris County, Texas, to Galveston Bay. In the past, it was home to the Karankawa and Akokisa tribes. It is named after Saint Hyacinth.

The two forks of the San Jacinto River are known as the East and West Forks. The west fork of the San Jacinto River feeds Lake Conroe and flows south through Montgomery County to meet with the east fork in northeast Harris County to form Lake Houston. The east fork begins in Walker County, north of the Sam Houston National Forest. Tributaries of both forks begin within just a few miles of Lake Livingston, a reservoir on the Trinity River. The east fork flows south through Cleveland in Liberty County, Montgomery County, and into the north end of Lake Houston. Continuing southward, the river merges with Buffalo Bayou before the mouth at Galveston Bay.

The Battle of San Jacinto was fought near the rain-swollen Buffalo Bayou in what is now Harris County during the 1836 Texas Revolution. The decisive victory gave rise to the Republic of Texas. The site is now a state historic park. The park is the site of the San Jacinto Monument.

In October 1994, flooding along the San Jacinto River led to the failure of eight petroleum products pipelines, and the undermining of a number of other pipelines. The escaping products were ignited, leading to smoke inhalation and/or burn injuries of 547 people.

In 2008, the EPA added the San Jacinto River waste pits to the federal Superfund cleanup list.

All content from Kiddle encyclopedia articles (including the article images and facts) can be freely used under Attribution-ShareAlike license, unless stated otherwise. Cite this article:
San Jacinto River (Texas) Facts for Kids. Kiddle Encyclopedia.