Cleveland is a city in the U.S. state of Texas, within Houston–The Woodlands–Sugar Land metropolitan area and Liberty County. The population was 7,954 at the 2010 census.

In 1854, a church and convent was built by Father Peter La Cour near the town's present site.

The town began forming in 1878 when Charles Lander Cleveland, a local judge, donated 63.6 acres (257,000 m2) of land to the Houston East & West Texas Railway (now part of the Union Pacific Railroad) for use as a stop, requesting that the town be named for him. Since 1900 Cleveland has served as the junction of this line and the Gulf, Colorado and Santa Fe (now the BNSF Railway). The town was not incorporated until 1935.

The forests around Cleveland, including Sam Houston National Forest, which is located just to its north, are a resort for many inhabitants of the Houston area, who come to camp, hike, hunt, and fish. Cleveland has several historic sites and public recreational facilities, including two parks. The Austin Memorial Library Center offers a wide range of services to the community, and the Texan Theater and the annual livestock show and rodeo, Dairy Days, provide entertainment. Commercially, Cleveland has been a shipping point for timber, lumber, and lumber byproducts since the 1870s. A large medical community, oil, gas, cattle, farm products, and sand and gravel are important to the town's economy. The general trend toward urbanization of the entire area is reflected by the fact that in 1965 Liberty County was added to the Houston Standard Metropolitan Statistical Area. The population of Cleveland grew from 1,200 in 1930 to 7,605 according to the census of 2000.

According to the United States Census Bureau, the city has a total area of 4.8 square miles (12 km2), all land.

Cleveland's northern boundary is made by the Sam Houston National Forest.

The climate in this area is characterized by hot, humid summers and generally mild to cool winters. According to the Köppen Climate Classification system, Cleveland has a humid subtropical climate, abbreviated "Cfa" on climate maps. 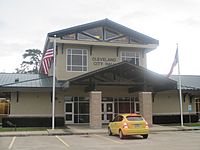 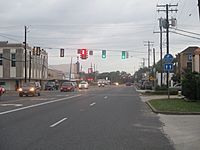 A portion of downtown Cleveland 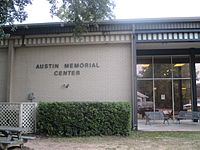 Austin Memorial Center is the public library in Cleveland.

There were 2,645 households out of which 34.0% had children under the age of 18 living with them, 42.4% were married couples living together, 19.0% had a female householder with no husband present, and 33.5% were non-families. 29.2% of all households were made up of individuals and 13.9% had someone living alone who was 65 years of age or older. The average household size was 2.63 and the average family size was 3.27.

All content from Kiddle encyclopedia articles (including the article images and facts) can be freely used under Attribution-ShareAlike license, unless stated otherwise. Cite this article:
Cleveland, Texas Facts for Kids. Kiddle Encyclopedia.