A portion of downtown Lufkin 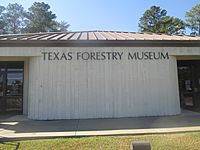 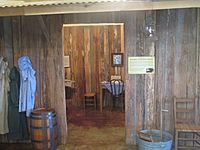 Replica of a sawmill worker's house at the Texas Forestry Museum

The city is named for Abraham P. Lufkin, a cotton merchant and Galveston city councilman. Lufkin was the father-in-law of Paul Bremond, president of the Houston, East and West Texas Railway which developed the town.

In 1906 while living in Lufkin, writer Katherine Anne Porter married her first husband John Henry Koontze in a double ring ceremony that also saw her sister Gay Porter marry T.H. Holloway. The minister who presided over the ceremony was Rev. Ira Bryce, serving at the time at Lufkin's First Methodist Church.

Debris from the Space Shuttle Columbia disaster fell over the Lufkin area on February 1, 2003.

Lufkin is at the crossroads of East Texas at the intersections of Highways US 59, future Interstate 69, which leads to Houston and the Rio Grande Valley to the south and Nacogdoches and Texarkana to the north, and US 69, which leads from the Golden Triangle of southeast Texas (Port Arthur and Beaumont) to points such as Jacksonville, Tyler, Dallas, and Oklahoma to the north.

Lufkin will be served by the extension to Interstate 69 which is planned to run from the Canada–US border at Port Huron, Michigan, to the Texas/Mexico border.

The Angelina and Neches River Railroad (A&NR) runs through Lufkin. It has an approximate length of 20 miles (32 km) and connects with the Union Pacific Railroad lines.

All content from Kiddle encyclopedia articles (including the article images and facts) can be freely used under Attribution-ShareAlike license, unless stated otherwise. Cite this article:
Lufkin, Texas Facts for Kids. Kiddle Encyclopedia.