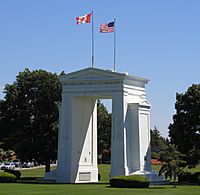 The Peace Arch at the border between Surrey, British Columbia, and Blaine, Washington

The Canada–United States border, officially known as the International Boundary, is the longest international border in the world shared between the same pair of countries. The terrestrial boundary (including small portions of maritime boundaries on the Atlantic, Pacific, and Arctic coasts, as well as the Great Lakes) is 8,891 kilometres (5,525 mi) long, including 2,475 kilometres (1,538 mi) shared with Alaska. It is Canada's only land border.

All content from Kiddle encyclopedia articles (including the article images and facts) can be freely used under Attribution-ShareAlike license, unless stated otherwise. Cite this article:
Canada–United States border Facts for Kids. Kiddle Encyclopedia.