The Ambassador Bridge is a tolled, international suspension bridge across the Detroit River that connects Detroit, Michigan, United States, with Windsor, Ontario, Canada. It is the busiest international border crossing in North America in terms of trade volume, carrying more than 25% of all merchandise trade between the United States and Canada. A 2004 Border Transportation Partnership study showed that 150,000 jobs in the Detroit–Windsor region and US$13 billion in annual production depend on the Detroit–Windsor international border crossing.

The bridge is one of the few privately owned US–Canada crossings; it was owned by Grosse Pointe billionaire Manuel Moroun, until his death in July 2020, through the Detroit International Bridge Company in the United States and the Canadian Transit Company in Canada. In 1979, when the previous owners put it on the New York Stock Exchange and shares were traded, Moroun was able to buy shares, eventually acquiring the bridge. The bridge carries 60 to 70 percent of commercial truck traffic in the region. Moroun also owned the Ammex Detroit Duty Free Stores at both the bridge and the tunnel.

View of the bridge from the Detroit River 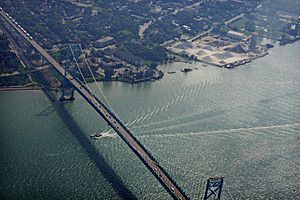 An aerial photograph of the bridge

The bridge over the Detroit River had the longest suspended central span in the world when it was completed in 1929—1,850 feet (560 m). This record held until the George Washington Bridge between New York and New Jersey opened in 1931. The bridge's total length is 7,500 feet (2,286 m). Construction began in 1927 and was completed in 1929. The general contractor and steel erector was the McClintic-Marshall Company of Pittsburgh, Pennsylvania.

The bridge is made up of 21,000 short tons (19,000 tonnes) of steel, and the roadway rises as high as 152 feet (46 m) above the Detroit River. Only the main span over the river is supported by suspension cables; the approaches to the main pillars are held up by steel in a cantilever truss structure.

The bridge's only sidewalk is on the structure's southwest side. After the September 11 attacks, pedestrians and bicycles were prohibited from traveling across the bridge due to increased security measures. For years prior to September 11, 2001, the sidewalk was closed due to ongoing maintenance projects and repainting.

Originally painted gloss black, the bridge underwent a five-year refurbishment between 1995 and 2000, which included stripping and repainting the bridge teal.

Granite blocks, originally used on the U.S. side, were given to the Windsor Parks and Recreation Department, and now grace many of the pathways in Windsor parks.

The Ambassador Bridge is the busiest crossing on the Canada–United States border. The four-lane bridge carries more than 10,000 commercial vehicles on a typical weekday. The Gateway Project, a major redesign of the U.S. plaza completed in July 2009, provides direct access to Interstate 96 (I-96) and I-75 on the American side and Highway 3 on the Canadian side. The Canadian end of the bridge connects to busy city streets in west Windsor, leading to congestion.

The privately owned bridge carries approximately 25% of trade between Canada and the United States. 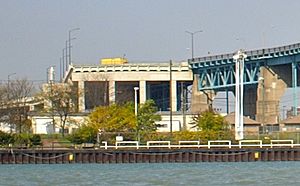 The Canadian and United States governments have approved the construction of the Gordie Howe International Bridge proposed by the Detroit River International Crossing (DRIC) commission. The new bridge further downriver between Detroit and Windsor will be owned and operated by the Windsor-Detroit Bridge Authority, a Crown corporation owned by the Canadian federal government.

Manuel "Matty" Moroun, past private owner of the Ambassador Bridge, spoke out against this proposal. He sued the governments of Canada and Michigan to stop its construction, and released a proposal to build a second span of the Ambassador Bridge (which he would own) instead. Critics suggest that Moroun's opposition was fueled by the prospect of lost profits from duty-free gasoline sales, which are exempt from about 60 cents per gallon in taxes even though the pump price to consumers is only a few cents lower. On May 5, 2011, a judge dismissed the case, citing a lack of reasoning for it to proceed. Maroun and his company contended that the new bridge would affect its proposal for a second span which would be built next to the Ambassador Bridge.

Michigan and Canadian authorities continued to support the Gordie Howe International Bridge proposal, since it directly connects the Canadian E.C. Row Expressway and the 2015 extension of Ontario Highway 401 (which runs concurrently as a shared highway for 2 kilometres (1.2 mi) to the future crossing as the Windsor–Essex Parkway) with I-75 and I-96 in Michigan, bypasses Windsor's surface streets and reduces congestion. An agreement announced on June 15, 2012, ensures the new bridge could proceed, with the Canadian federal government funding bridge construction, land acquisition in Michigan and the construction of ramps from I-75. The Canadian contribution will be repaid from bridge tolls, although to date no study has shown toll revenue forecasts.

The company which owns the Ambassador Bridge proposed its own twin span with six lanes to be built across the Detroit River. Cost estimates range from one to two billion U.S. dollars to build a second span. The new span would be a cable-stayed bridge and would accommodate the bulk of the cross-border traffic with the original span being used for overflow traffic. However, a twin span adjacent to the Ambassador Bridge, by itself, does not address Canadian concerns about traffic on Huron Church Road in Windsor. While many of the stop lights commonly cited have been removed by the expansion of the 401 which will connect to the downriver Howe bridge, the final approach to the Ambassador Bridge remains on overcrowded Windsor surface streets.

In April 2013, the U.S. State Department issued a Presidential permit to the state of Michigan for a new international crossing between the United States and Canada. Moroun filed a lawsuit attempting to block the issuance of this permit, claiming that the Presidential permit process is unconstitutional.

All content from Kiddle encyclopedia articles (including the article images and facts) can be freely used under Attribution-ShareAlike license, unless stated otherwise. Cite this article:
Ambassador Bridge Facts for Kids. Kiddle Encyclopedia.