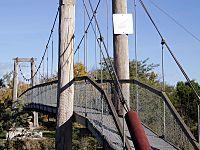 A suspension bridge can be made out of simple materials such as wood and common wire rope.

A suspension bridge is a type of bridge that has been made since ancient times as early as 100 AD. Some simple suspension bridges, for use by pedestrians and livestock, are still constructed, based upon the ancient Inca rope bridge.

Suspended from two high locations over a river or canyon, simple suspension bridges follow a shallow downward arc and are not suited for modern roads and railroads.

The design of the modern suspended-deck suspension bridge was developed in the early 19th century. It can cross a longer span than other kinds of bridges.

The Akashi Kaikyō Bridge is the world's longest suspension bridge.

All content from Kiddle encyclopedia articles (including the article images and facts) can be freely used under Attribution-ShareAlike license, unless stated otherwise. Cite this article:
Suspension bridge Facts for Kids. Kiddle Encyclopedia.