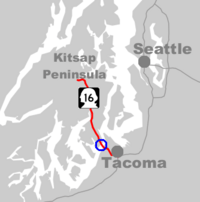 Map showing location of the bridge

The 1940 Tacoma Narrows Bridge was the first version of the Tacoma Narrows Bridge. It was a suspension bridge in the U.S. state of Washington. The bridge was built over the Tacoma Narrows strait of Puget Sound between Tacoma and the Kitsap Peninsula. It opened on July 1, 1940. The bridge collapsed into Puget Sound on November 7 of the same year. At that time, it was the third longest suspension bridge in the world in terms of main span length. The Golden Gate Bridge and the George Washington Bridge were the only bridges that were larger.

Construction of the bridge started in September 1938. After the deck was built, the wind caused it to move vertically. Because of this, the people building it gave it the nickname Galloping Gertie. The movement was seen even when the bridge opened to the public. Many things were tried to stop the bridge from moving. None of these things worked. The bridge's main span collapsed under 40-mile-per-hour (64 km/h) winds on the morning of November 7, 1940.

Because of World War II, the bridge could not be built again at that time. The towers and cables of the bridge were still in place. These and the rest of the bridge were taken apart and sold as scrap metal. In 1950, a new Tacoma Narrows Bridge opened in the same place. It used the first bridge's tower pedestals and cable anchorages. The parts of the bridge that fell into the water are now an artificial reef.

The bridge's collapse had lasting effects on science and engineering. In many physics books, it is used to show resonance. Its collapse also helped increase research in the field of bridge aerodynamics-aeroelastics. This has affected the designs of all the world's large long-span bridges built since 1940.

People wanted a bridge built between Tacoma and the Kitsap Peninsula since the late 1800s. In 1889, the Northern Pacific Railway wanted to build a trestle there. The Tacoma Chamber of Commerce began working toward getting the money to build a bridge in 1923. Many well known bridge engineers were talked to about the bridge. These included Joseph B. Strauss and David B. Steinman. Later in time, Strauss was the main engineer of the Golden Gate Bridge and he designed the Mackinac Bridge. Steinman went to the area many times. He created a plan for the bridge in 1929. By 1931, the Chamber chose not to follow his plan because they thought Steinman was not doing enough to help get money to pay for the bridge. Another problem with paying for the bridge was buying out the ferry contract from a company that was running service on the Narrows at the time.

Clark Eldridge, an engineer working for the state, created a suspension bridge design. This design was similar to the design of many other suspension bridges. It was a design that had be shown to work very well at other places. The Washington Toll Bridge Authority asked for $11 million from the Federal Public Works Administration (PWA). Early construction plans by the Washington Department of Highways had a set of 25-foot-deep (7.6m) girders to sit beneath the roadway. These would make the roadway more stiff so it would not move easily.

Leon Moisseiff had other ideas about building the bridge. Moisseiff was a well known New York bridge engineer. He was the designer and consultant engineer for the Golden Gate Bridge. Moisseiff talked to the PWA and the Reconstruction Finance Corporation (RFC) about building the bridge for less money. He suggested that they use shallower supports—girders that were only 8 feet (2.4 m) deep. His ideas meant the bridge would be slimmer but they reduced the construction costs. Moisseiff's design was chosen. The other design was said to cost too much. On June 23, 1938, the PWA approved nearly $6 million for the Tacoma Narrows Bridge. Tolls from the bridge would earn another $1.6 million pay for the estimated total $8 million cost.

Using Moisseiff's design, bridge construction began on September 27, 1938. Construction took only nineteen months. It cost $6.4 million. The Tacoma Narrows Bridge, with a main span of 2,800 feet (850 m), was the third-longest suspension bridge in the world at that time. The two larger bridges were the George Washington Bridge between New Jersey and New York City, and the Golden Gate Bridge, just north of San Francisco.

Because the bridge was not expected to have large amounts of traffic, the bridge was designed with only two lanes. It was just 39 feet (12 m) wide. This was quite narrow given how long it was. With only the 8 feet (2.4 m)-deep girders to give it extra depth, the bridge's roadway was very shallow.

The shallow and narrow girders are what caused the bridge to collapse. With such small girders, the deck of the bridge was not rigid enough. It was easily moved by the winds. The bridge was well known for its movement. A small wind could make the center span move several feet during four- to five-second intervals. This was seen by the builders and workmen during construction. It caused some of the workers to name the bridge "Galloping Gertie." Even the public felt these motions on the day that the bridge opened on July 1, 1940.

Another reason the bridge swayed and then fell was its solid sides. This did not allow wind to pass through the bridge's deck. This design allowed the bridge to catch the wind and sway, which ultimately took it down.

Because the bridge moved so much while it was being built, many ideas were used to make it move less. They included

The Washington Toll Bridge Authority hired Professor Frederick Burt Farquharson to make tests of the bridge in a wind-tunnel. He was an engineering professor at the University of Washington. Professor Farquharson and his students built a 1:200-scale model of the bridge and a 1:20-scale model of a section of the deck. The first studies ended on November 2, 1940. This was five days before the bridge collapse on November 7. He found two ways to fix the problem:

The first option was not not liked because of if the changes were done, they could not be undone. The second option was the chosen one. It was not done because the bridge collapsed five days later. 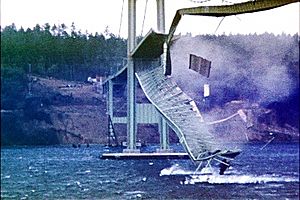 The bridge collapsing, in a frame from a 16mm Kodachrome motion picture film taken by Barney Elliott

The collapse happened on November 7, 1940, at 11:00 a.m. (Pacific time). It was caused by physical phenomenon known as aeroelastic flutter.

Leonard Coatsworth, a Tacoma News Tribune editor was the last person to drive on the bridge. He was driving with his dog, Tubby, over the bridge when the bridge started to vibrate very badly. Coatsworth had to leave his car:

Just as I drove past the towers, the bridge began to sway violently from side to side. Before I realized it, the tilt became so violent that I lost control of the car...I jammed on the brakes and got out, only to be thrown onto my face against the curb...Around me I could hear concrete cracking...The car itself began to slide from side to side of the roadway.

On hands and knees most of the time, I crawled 500 yards (460 m) or more to the towers...My breath was coming in gasps; my knees were raw and bleeding, my hands bruised and swollen from gripping the concrete curb...Toward the last, I risked rising to my feet and running a few yards at a time...Safely back at the toll plaza, I saw the bridge in its final collapse and saw my car plunge into the Narrows.

No one died in the collapse of the bridge. Tubby, a black male cocker spaniel, was the only death of the Tacoma Narrows Bridge disaster. The dog was lost along with Coatsworth's car. Professor Farquharson and a news photographer tried to save Tubby, but the dog was too scared to leave the car. He bit one of the people trying to save him. Tubby died when the bridge fell. Neither his body nor the car were ever recovered. Coatsworth had been driving Tubby back to his daughter. She was the owner of the dog. Coatsworth was payed US $450 for his car and $364.40 for what was in the car. This included Tubby. 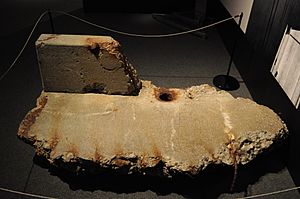 A fragment of the collapsed bridge, in the Washington State History Museum, Tacoma, Washington.

Theodore von Kármán was one of the people who tried to learn what caused the collapse. He was the director of the Guggenheim Aeronautical Laboratory and a well known aerodynamicist. He said that the State of Washington could not get money from one of the insurance policies for the bridge. This was because its insurance agent had fraudulently taken the insurance pyments. The agent, Hallett R. French worked for the Merchant's Fire Assurance Company. He was charged with grand larceny for keeping the payments for $800,000 worth of insurance. The bridge was insured by many other policies. These covered 80% of the $5.2 million bridge's value. Most of these were payed without problems.

Fate of the collapsed superstructure

Efforts to save the bridge started after its collapse. They continued into May 1943. It was decided that the bridge could not be repaired. The entire bridge would have to be taken down. A new bridge would have to be built. At the time, the United States was dealing with World War II. This meant the steel that would be needed to built the bridge was needed for the war. Steel from the old bridge cables and the suspension span was sold melted down. It cost the state more to destroy the bridge than it earned by selling the materials. The state lost over $350,000.

The cable anchorages, tower pedestals and most of the substructure were not damaged badly in the collapse. They were used again during construction of the new bridge that opened in 1950. The towers were badly damaged. They were taken down. The steel in them was sold to be melted down.

"Preservation" of the collapsed roadway 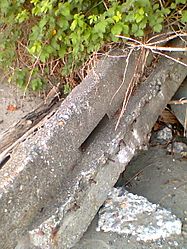 Remains of the collapsed bridge

The parts of the bridge that fell into the water below are now a large artificial reef. They are listed on the National Register of Historic Places with reference number 92001068.

A lesson for history

Othmar Ammann is a leading bridge designer. He is also a member of the Federal Works Agency Commission that looked at the causes of the collapse of the Tacoma Narrows Bridge. He wrote:

The Tacoma Narrows bridge failure has given us invaluable information...It has shown [that] every new structure [that] projects into new fields of magnitude involves new problems for the solution of which neither theory nor practical experience furnish an adequate guide. It is then that we must rely largely on judgement and if, as a result, errors, or failures occur, we must accept them as a price for human progress.

The Bronx Whitestone Bridge has a design that is much like the 1940 Tacoma Narrows Bridge. It was reinforced after the collapse. Fourteen-foot-high (4.3 m) steel trusses were added on both sides of the deck in 1943. These add weight to the bridge and make it more stiff. This was done to reduce oscillation. In 2003, the trusses were removed. Aerodynamic fiberglass fairings were added along both sides of the road deck.

Because of materials and labor shortages caused by World War II, it took 10 years before a new bridge was opened. This bridge was opened to traffic on October 14, 1950. It is 5,979 feet (1,822 m) long — 40 feet (12 m) longer than Galloping Gertie. The new bridge also has more lanes than the original bridge.

All content from Kiddle encyclopedia articles (including the article images and facts) can be freely used under Attribution-ShareAlike license, unless stated otherwise. Cite this article:
Tacoma Narrows Bridge (1940) Facts for Kids. Kiddle Encyclopedia.