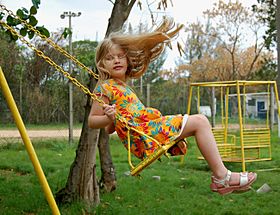 Pushing a person in a swing is a common example of resonance. The loaded swing, a pendulum, has a natural frequency of oscillation, its resonant frequency, and resists being pushed at a faster or slower rate.

coefficients.]]In physics, resonance is the tendency of a system to vibrate with increasing amplitudes at some frequencies of excitation. These are known as the system's resonant frequencies (or resonance frequencies). The resonator may have a fundamental frequency and any number of harmonics.

An example of useful effect of resonant frequency is a guitar string which makes a characteristic noise when it is touched. The noise depends on how thick or slack the string is.

In earthquake engineering, on contrary, any possibility of a resonance is detrimental for the building structure.

The Kirkwood gap and other connections among orbits are caused by orbital resonance.

All content from Kiddle encyclopedia articles (including the article images and facts) can be freely used under Attribution-ShareAlike license, unless stated otherwise. Cite this article:
Resonance Facts for Kids. Kiddle Encyclopedia.