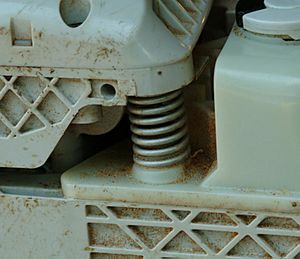 A saw isolated from its engine.

Vibration isolation is a system of devices to decouple a mechanical or structural object from its vibrating supports.

For example, the handles of the saw presented in the right photo are separated from the engine and cutting bar to reduce shaking for the operator. Here, the spring mount is a part of this vibration isolation system.

From the very beginning, the theory of vibration isolation, in general, and of base isolation, in particular, rested on two pillars: heavy damping and frequency separation. Unfortunately, nobody paid any attention that the heavy damping was a sort of a strong connection between a substructure and superstructure, and that the idea of decoupling them with the help of such connections was of no good.

All content from Kiddle encyclopedia articles (including the article images and facts) can be freely used under Attribution-ShareAlike license, unless stated otherwise. Cite this article:
Vibration isolation Facts for Kids. Kiddle Encyclopedia.