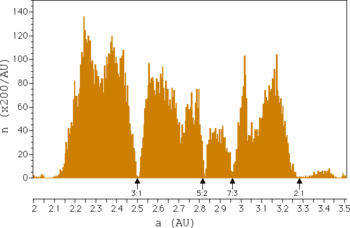 Kirkwood gaps are areas of the asteroid belt where there are fewer asteroids than there would usually be, as seen in the graph on the right. They are caused by orbital resonances with Jupiter.

The gaps were first noticed in 1857 by Daniel Kirkwood, who also correctly explained their origin in the orbital resonances with Jupiter while a professor at Jefferson College in Canonsburg, Pennsylvania.

All content from Kiddle encyclopedia articles (including the article images and facts) can be freely used under Attribution-ShareAlike license, unless stated otherwise. Cite this article:
Kirkwood gap Facts for Kids. Kiddle Encyclopedia.