Research is the process of solving problems and finding facts in an organised way. Research is done by using what is known (if anything), and building on it. Additional knowledge can be got by proving (or falsifying) existing theories, and by trying to better explain observations. Research should be systematic, organized and objective.

"If we knew what it was we were doing, it would not be called research, would it?" — Albert Einstein

Researchers take part in field or laboratory experiments, reading relevant books, journals or websites, taking notes and making conclusions. Teaching and lecturing is only part of the job of a professor or researcher. When they are not directly teaching classes they are often working on academic research. Learning institutions can vary widely in what they expect from members of their faculty. Most expect faculty members to set up their own laboratories. They hire their own lab employees and obtain their own funding, often from more than one source. Academic researchers often compete for grants to fund research at their own university. The more money researchers can attract, the higher the prestige of that university. 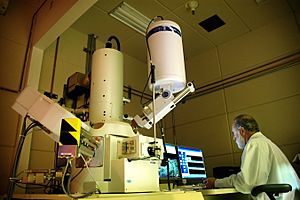 Primary scientific research being carried out at the Microscopy Laboratory of the Idaho National Laboratory.

Money for research comes from governments, private corporations, and charities. Some of these organizations combine research and development of new products and ways of doing their work.

Some basic principles of research 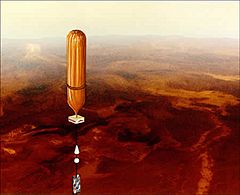 Research balloon flying above the surface of Venus.

Any research should be:

Research must be published so the world can learn from it. Nature, Science and Proceedings of the Royal Society, are general scientific journals. Many special journals are published.

All content from Kiddle encyclopedia articles (including the article images and facts) can be freely used under Attribution-ShareAlike license, unless stated otherwise. Cite this article:
Research Facts for Kids. Kiddle Encyclopedia.