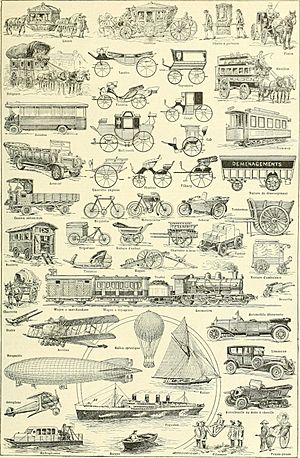 Transport, or transportation, is moving people or things from one place to another place. Transport can be divided into infrastructure, vehicles and operations.

Vehicles or vessels travel on the infrastructure. Vehicles include cars, trucks, trains and airplanes. Vehicles are usually designed by mechanical engineers. Vessels include boats, ferries, and barges which travel on canals and use docks and seaports. In the same way that trains use train stations, airplanes use airports. In the same way that trains use railway lines (train tracks), airplanes use flight paths and then fly in the sky.

Operations control the system. Operations include traffic signals, railway signals and air traffic control. Operations also include the government policies (a policy is a plan of action to guide decisions and actions) and regulations (a set or group of laws and rules) used to control the system, such as tolls, fuel taxes, and traffic laws.

Transport and communication can be used instead of each other (someone could telephone a person rather than visit them). Transport traffic also needs communication. For example, air traffic control lets more airplanes fly. So, an increase of either transport or communication usually leads to an increase in the other one.

Transport, energy, and the environment

Transport uses a lot of energy. Most transport uses hydrocarbons (oil and gas). This can create pollution. Environmental regulations (laws) and low-pollution fuels (for example liquified natural gas) can reduce pollution. But as more vehicles are used, more pollution is created. Ethanol and biodiesel pollute less than petroleum.

Transport can be by land, water or air:

All content from Kiddle encyclopedia articles (including the article images and facts) can be freely used under Attribution-ShareAlike license, unless stated otherwise. Cite this article:
Transport Facts for Kids. Kiddle Encyclopedia.