Airbus A380 facts for kids

The Airbus A380 prototype lands in France.

The Airbus A380 (also called "Super-jumbo-jet") is a four-engined, double-decked airplane manufactured by Airbus. It is the world's biggest passenger airplane, larger than the Boeing 747 Jumbo Jet. However, it is not the biggest airplane in the world; the Antonov An-225 super-freighter is bigger.

The Airbus A380 can carry up to 850 passengers (but it usually carries about 525), and weighs over 550 tonnes. It has four Rolls-Royce Trent 900 engines or four Engine Alliance GP7000 engines. The companies General Electric and Pratt & Whitney make alliance engines. 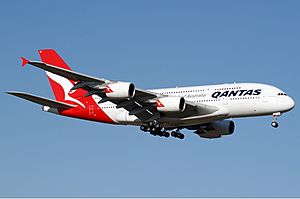 A Qantas Airbus A380 at Melbourne Airport

Hundreds of A380-800 airplanes have been ordered by 20 airlines. One has been ordered by a Saudi Arabian Prince, Al-Walid bin Talal and 10 by a company called ILFC (who gives other airlines airplanes for rent).

Emirates Airlines (an airline from the United Arab Emirates) will have the most A380 aircraft, because they have ordered 162 aircraft. Singapore Airlines took delivery of the first A380, which flew to Sydney in Australia on October 25, 2007. Singapore Airlines now have 19 A380s and are still waiting for 5 more.

Airbus was going to make a version of the A380 to carry cargo instead of people. This would look almost the same as the normal passenger version, but with no windows and much bigger doors. Some cargo companies ordered the plane, like FedEx and UPS. Because Airbus took too long to make the A380, those orders were canceled. Because Airbus has not got any orders for the plane anymore, they decided to not make the freighter version for a while and focus on making the passenger version of the A380.

The Airbus A380 had 1 incident, with no deaths.

All content from Kiddle encyclopedia articles (including the article images and facts) can be freely used under Attribution-ShareAlike license, unless stated otherwise. Cite this article:
Airbus A380 Facts for Kids. Kiddle Encyclopedia.