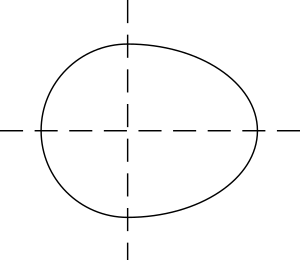 This oval, with only one axis of symmetry, resembles a chicken egg.

An oval (from Latin ovum, "egg") is a closed curve in a plane which "loosely" resembles the outline of an egg. The term is not very specific, but in some areas (projective geometry, technical drawing, etc.) it is given a more precise definition, which may include either one or two axes of symmetry. In common English, the term is used in a broader sense: any shape which reminds one of an egg. The three-dimensional version of an oval is called an ovoid. 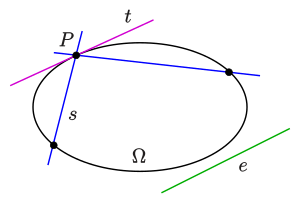 To the definition of an Oval in a projective plane 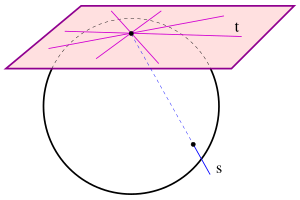 To the definition of an ovoid

The term oval when used to describe curves in geometry is not well-defined, except in the context of projective geometry. Many distinct curves are commonly called ovals or are said to have an "oval shape". Generally, to be called an oval, a plane curve should resemble the outline of an egg or an ellipse. In particular, these are common traits of ovals:

An ovoid is the surface in 3-dimensional space generated by rotating an oval curve about one of its axes of symmetry. The adjectives ovoidal and ovate mean having the characteristic of being an ovoid, and are often used as synonyms for "egg-shaped".

The shape of an egg is approximated by the "long" half of a prolate spheroid, joined to a "short" half of a roughly spherical ellipsoid, or even a slightly oblate spheroid. These are joined at the equator and share a principal axis of rotational symmetry, as illustrated above. Although the term egg-shaped usually implies a lack of reflection symmetry across the equatorial plane, it may also refer to true prolate ellipsoids. It can also be used to describe the 2-dimensional figure that, if revolved around its major axis, produces the 3-dimensional surface.

An oval with two axes of symmetry constructed from four arcs (top), and comparison of blue oval and red ellipse with the same dimensions of short and long axes (bottom).

In technical drawing, an oval is a figure constructed from two pairs of arcs, with two different radii (see image on the right). The arcs are joined at a point in which lines tangential to both joining arcs lie on the same line, thus making the joint smooth. Any point of an oval belongs to an arc with a constant radius (shorter or longer), but in an ellipse, the radius is continuously changing.

In common speech, "oval" means a shape rather like an egg or an ellipse, which may be two-dimensional or three-dimensional. It also often refers to a figure that resembles two semicircles joined by a rectangle, like a cricket infield, speed skating rink or an athletics track. However, this is more correctly called a stadium. Sometimes, it can even refer to any rectangle with rounded corners.

In Australia an oval can be a ground for Australian Rules football such as Adelaide Oval.

A speed skating rink is often called an oval

The terms "ellipse" and "oblong" are often used interchangibly with oval, despite not being precise synonyms.

All content from Kiddle encyclopedia articles (including the article images and facts) can be freely used under Attribution-ShareAlike license, unless stated otherwise. Cite this article:
Oval Facts for Kids. Kiddle Encyclopedia.