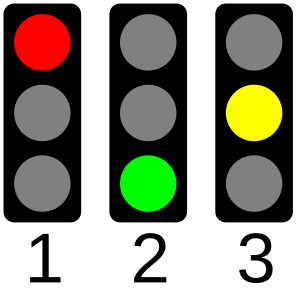 Traffic lights (or traffic signals) are lights used to control the movement of traffic. They are placed at road intersections and crossings. The different colors of lights tell drivers what to do.

Lester Wire was credited with the invention of the electric traffic light in 1912 in Salt Lake City, Utah. Garrett Morgan, an African-American inventor, also developed a traffic signaling system, and was one of the first people to get a patent for a traffic light.