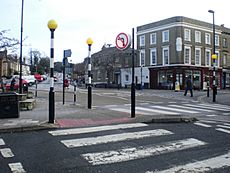 An pedestrian crossing (or crosswalk) is a painted road surface where pedestrians may cross a road. They are part of a safety system which allows people to cross roads when it is safe to do so. In town and cities, traffic and pedestrians are both users of roads. There must be rules which keep pedestrians safe, but allow traffic to flow as smoothly as possible.

Marked pedestrian crossings are often found at intersections. but may be at other points on busy roads. They are also installed where large numbers of pedestrians are attempting to cross (such as in shopping areas) or where vulnerable road users (such as school children) regularly cross. Rules govern usage of the pedestrian crossings to ensure safety. For example, in some areas, the pedestrian must be more than halfway across the crosswalk before the driver may proceed.

All content from Kiddle encyclopedia articles (including the article images and facts) can be freely used under Attribution-ShareAlike license, unless stated otherwise. Cite this article:
Pedestrian crossing Facts for Kids. Kiddle Encyclopedia.