Havelock North is a part of Hastings, New Zealand, in the North Island's Hawke's Bay district. It was a borough for many years until the 1989 reorganisation of local government saw it merged into the new Hastings District, and it is now administered by the Hastings District Council.

Havelock North was founded as a planned Government settlement following the purchase in 1858, from Maori owners, of land previously known as 'Karanema's Reserve'. The original village was laid out in 1860 and named after the hero of the 1857 Indian seypoy mutiny Sir Henry Havelock who famously relieved the siege of Lucknow in November of that year. The suburb, known locally as "the village", is situated on the Heretaunga Plains, less than 2 km to the south-east of Hastings. The surrounding area has numerous orchards and vineyards, and the town's industry is based around its fruit and wine production, and also includes a horticultural research centre. The fertile soils that lie between Havelock North and Hastings has prevented urban sprawl linking them together. Havelock North itself is primarily residential and rural-residential housing, with only a relatively small and compact industrial and commercial centre. As a result, a large majority of its 13,000 residents commute each morning to the nearby[Hastings or Napier cities for work.

Havelock North is situated at the base of the prominent landmark Te Mata Peak, a 399-metre outcrop, which according to local Māori legend is the body of the giant Te Mata o Rongokako, and the depression in the land visible behind his head according to the myth is where he tried to bite through the mountain range which filled his stomach turning him to stone.

One of the town's most impressive buildings is Whare Ra, a house built for a temple of the Hermetic Order of the Golden Dawn in the early twentieth century.

Havelock North is generally hilly, as it is on the foothills of Te Mata Peak and small gullies have been formed by the creeks and streams flowing from Te Mata Peak, resulting in a small amount of inaccessible or steep land which is converted into forests, parks or reserves, giving the image of naturally having many bushes and trees.

As you enter Havelock North from Hastings you cross a bridge over the Karamu Stream. The deeply incised channel provides a hint that this was once a much larger stream. In the early 1800s this stream was part of the much larger Ngaruroro River system, and was once called the "River Plassey", the same name also being applied to a street in the village after the battle of Plassey of 1757 near Calcutta in India where British Empire hero Robert Clive defeated the Mughal Nawab Siraj ud Daulla. Early survey plans of Havelock North show Ferry landings where boats would sail up and down the river to collect and deliver supplies. Unfortunately a number of large floods during the mid 1800s diverted the Ngaruroro River to its current course further north away from Havelock North and is now referred to as the Karamu Stream.

During the 1931 earthquake the bridge over the Karamu was completely destroyed. Both Hastings and Havelock North obtain water from secure confined aquifer systems. The Te Mata aquifer that feeds Havelock North is very similar to Hastings in quality, but has slightly elevated calcium levels. Hastings is situated directly over the Heretaunga Plains aquifer system. 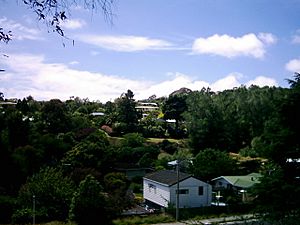 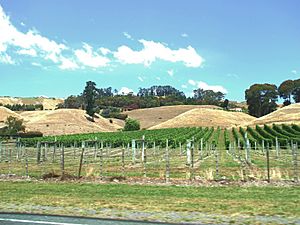 Havelock North took its name from Sir Henry Havelock, a hero of the Indian Mutiny campaign, thus keeping with the local habit of naming towns after prominent men from Imperial India. Its founders originally envisaged a larger town for the site, but when the Wellington-Napier rail line went through the area in 1874 it took a direct route some distance from Havelock North, and Hastings became a more logical choice for residents

Like a number of North Island towns, Havelock North has grown larger than its South Island namesake, Havelock, in the Marlborough Sounds.

Havelock North was the centre for Havelock Work, a quasi-religious movement based at Whare Ra, a temple of the Stella Matutina magical order.

In August 2016, over 3,000 residents had gastric illness after the water supply was contaminated by campylobacter.

All content from Kiddle encyclopedia articles (including the article images and facts) can be freely used under Attribution-ShareAlike license, unless stated otherwise. Cite this article:
Havelock North Facts for Kids. Kiddle Encyclopedia.