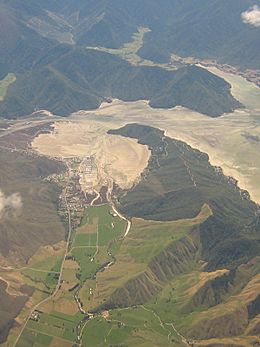 Havelock from the air looking north, at low tide.

Havelock is a coastal village in the Marlborough region of New Zealand. It sits at the head of Pelorus Sound, one of the Marlborough Sounds, and at the mouth of the Pelorus and Kaituna Rivers. The population was 486 in the 2006 Census, an increase of 12 from 2001.

State Highway 6 from Nelson to Blenheim passes through the town. Queen Charlotte Drive, which provides a shorter but very winding road to Picton proceeds east along the edge of the Sounds. Canvastown is 10 kilometres (6.2 mi) to the west. Renwick is 31 km (19 mi) to the south. Picton is 35 km to the east.

Havelock is the centre for much of the New Zealand green-lipped mussel industry, and is called the greenshell mussel capital of the world. It is also the base of a mail boat servicing the remote communities in the Marlborough Sounds, as well as many fishing and recreational boats.

Havelock was named after Sir Henry Havelock, known from the Siege of Lucknow during the Indian Rebellion of 1857. The streets were laid out in 1858, with the main street being Lucknow Street. The gold rush to the Wakamarina Valley in 1864 led to a growing township, with sawmilling being the main activity until the 1910s, later joined by dairying. The valleys around Havelock contain many pine plantations.

Across the Kaituna River estuary, Cullen Point and Mahakipawa Scenic Reserves offer a coastal walking track to a lookout at Cullen Point.

All content from Kiddle encyclopedia articles (including the article images and facts) can be freely used under Attribution-ShareAlike license, unless stated otherwise. Cite this article:
Havelock, New Zealand Facts for Kids. Kiddle Encyclopedia.