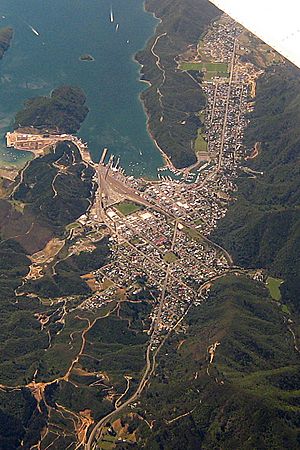 Picton from the air. 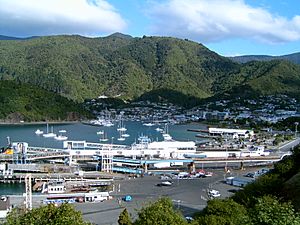 A view of the harbour in Picton. 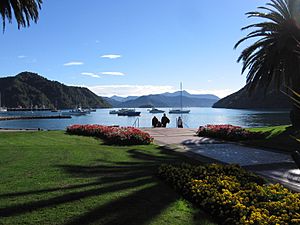 Picton, a park at the coast.

Picton is a town in the Marlborough Region of New Zealand's South Island. The town is located near the head of the Queen Charlotte Sound, 25 km (16 mi) north of Blenheim and 65 km (40 mi) west of Wellington. Waikawa lies just north-east of Picton, and is often considered to be contiguous part of Picton.

Picton is a major hub in New Zealand's transport network, connecting the South Island road and rail network with ferries across Cook Strait to Wellington and the North Island. The town has a population of 4,340 (June 2016), making it the second-largest town in the Marlborough Region behind Blenheim. It is the easternmost town in the South Island with a population of at least 1,000 people.

The town is named after Sir Thomas Picton, the Welsh military associate of the Duke of Wellington, who was killed at the Battle of Waterloo.

The Main North railway line and State Highway 1 link Picton southwards to Blenheim, Kaikoura, Christchurch and beyond, while the scenic Queen Charlotte Drive (shorter in distance but usually slower than State Highway 1/State Highway 6 via Rapaura, near Blenheim) winds westward to Havelock. The completion of the highway link ended the relative isolation of this scenic area in the 1950s and encouraged modern motels, beginning with the American Luxury Motels, and many more after the ferry service to Wellington began.

Picton is the main link between the South and North Islands, with scheduled ferry service over Cook Strait. The two main shipping companies operating this route are the Interislander and Strait Shipping, with both offering Roll-on/roll-off capabilities for cars and trucks, and for the Interislander sometimes trains. There have been proposals in recent years (the last time being 2011) to relocate the ferry terminals from Picton to Clifford Bay, south of Blenheim, to reduce travel times. However these plans never got past the design proposal, and were eventually dropped.

The Coastal Pacific long-distance passenger/tourist train from Christchurch makes a daily return trip to Picton, during the summer months. The 1914 railway station has been listed NZHPT Category II since 1991. It is a standard class B station, of weatherboard and tile.

Picton Aerodrome at Koromiko 7.4 km to the south of the town has regular services to Wellington with Sounds Air and charter flights around the Marlborough sounds.

The Edwin Fox Maritime Centre features the remains of the Edwin Fox, the only surviving ship that transported convicts to Australia, and a small museum.

Author Katherine Mansfield spent time in Picton where her grandparents, Arthur and Mary Beauchamp, and her father Harold, lived for some time when they came from Australia. She included a reference to the port in her short story "The Voyage" (in the collection The Garden Party), which is "an account of a trip to Picton from Wellington on the Cook Strait ferry".

The town is also the usual starting point for holidays to the Marlborough Sounds. Highlights include fishing, walking, the Queen Charlotte Sound (New Zealand) Track, and Diving. A popular dive trip is to the 177m long wreck of the former cruise liner MS Mikhail Lermontov, which now lies at Port Gore, 37 metres underwater.

Other excellent dive sites in the Picton region Technical diving and TDI (Technical Diving International) courses can be completed in Picton, diving in the Marlborough Sounds.

All content from Kiddle encyclopedia articles (including the article images and facts) can be freely used under Attribution-ShareAlike license, unless stated otherwise. Cite this article:
Picton, New Zealand Facts for Kids. Kiddle Encyclopedia.