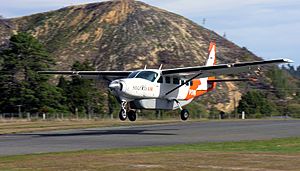 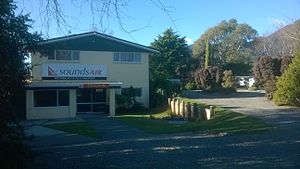 Picton Aerodrome (IATA: PCN, ICAO: NZPN) is a Non-Certificated Aerodrome 4 NM (7.4 km; 4.6 mi) south of Picton township in the Marlborough District of the South Island in New Zealand. Sounds Air has 5 flights per day to Wellington. The Marlborough Sounds Airpark is located nearby offering 16 private hangars adjacent to the main runway with remote control access for the owners to park their aircraft. On 2 January 1986 seven people died when a Cessna aircraft crashed on takeoff near Picton. Later in another accident on 29 January 1996 five died when a Cessna Caravan crashed on approach to Picton.

All content from Kiddle encyclopedia articles (including the article images and facts) can be freely used under Attribution-ShareAlike license, unless stated otherwise. Cite this article:
Picton Aerodrome Facts for Kids. Kiddle Encyclopedia.