Wellington Airport (formerly known as Rongotai Airport) (IATA: WLG, ICAO: NZWN) is an international airport located in the suburb of Rongotai in Wellington, the capital city of New Zealand. It lies 3 NM or 5.5 km south-east from the city centre. It is a hub for Air New Zealand and its subsidiaries. Wellington International Airport Limited, a joint venture between Infratil and the Wellington City Council, operates the airport.

The airport, in addition to linking many New Zealand destinations with national and regional carriers, also has links to major cities in eastern Australia. It is the home of some smaller general aviation businesses, including the Wellington Aero Club which operates from the general aviation area on the western side of the runway.

The airport comprises a small 110-hectare (270-acre) site on the Rongotai isthmus, a stretch of low-lying land between Wellington proper and the Miramar Peninsula. It operates a single 2,081-metre (6,827 ft) runway with ILS in both directions. The airport handles turboprop, narrow-body and wide-body jet aircraft movements. The airport is bordered by residential and commercial areas to the east and west, and by Wellington Harbour and Cook Strait to the north and south respectively.

Wellington has a reputation for sometimes rough and turbulent landings, even in larger aircraft, due to the channelling effect of Cook Strait creating strong and gusty winds, especially in pre frontal north westerly conditions. 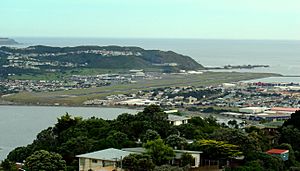 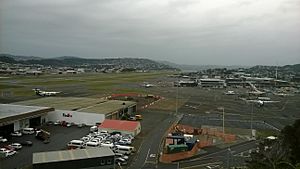 The view looking north of Wellington Airport in July 2015 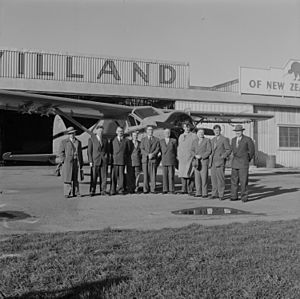 Sir Edmund Hillary, Joseph Holmes Miller and others at Rongotai Airport in 1956

Rongotai Airport started with a tar runway in November 1929. The airport opened in 1935, but was closed down due to safety reasons on 27 September 1947 (grass surface often became unusable during winter months). During the closure, Paraparaumu Airport, 35 miles north of Wellington, was Wellington's airport, and became the country's busiest airport in 1949. 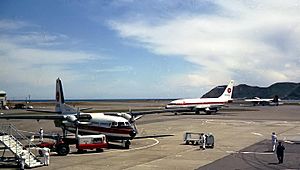 A proposal to relocate the terminal from the east side to the site of the Miramar Golf Course was put forward in 1956. Houses were moved and hills were bulldozed to make way for the construction of the new Wellington Airport in 1958, at a total cost of £5 million. The current airport was officially reopened on 25 October 1959, after lobbying by the local Chamber of Commerce for a location that was much closer to the city centre. Paraparaumu Airport was deemed unsuitable for large planes due to adverse terrain. The original length of the runway was 1,630 metres (5,350 ft), and was extended to the length of 1,936 metres (6,352 ft) in the early 1970s, to handle DC-8s.

Wellington's original domestic terminal was built as a temporary measure inside a corrugated iron hangar, originally used to assemble de Havilland aircraft. It was known for being overcrowded, leaky and draughty. This building remained visible from the Sounds Air terminal from which a covered walkway used to link the old terminal to the new one, but has since been removed. An upgrade of the domestic terminal, budgeted at NZ$10 million, was announced in 1981, but by 1983 the plans were shelved after cost projections more than doubled. The terminal was extensively refurbished in 1987 by Air New Zealand, and Ansett New Zealand built a new terminal as an extension to the international terminal when it commenced competing domestic air services in 1987.

In 1991, the airport released plans to widen the taxiway to CAA Code D & E specifications and acquire extra space, which were abandoned after protests from local residents. The plan involved the removal of the nearby Miramar Golf Course and a large number of residential and commercial properties. The Airport purchased land from the Miramar Golf Course in 1994 for car park space.

As recently as 1992, several alternate sites for Wellington Airport were considered – Te Horo, Paraparaumu, Mana Island, Ohariu Valley, Horokiwi, Wairarapa and Pencarrow – but a decision was made to upgrade the existing site at Rongotai. A major new terminal was completed in 1999 and integrated with the international terminal, which had been built as an abortive first stage of a whole new terminal in 1977. A 90 m safety zone at the south end of the runway was constructed in order to comply with ICAO safety regulations, while a similar zone has been put in place at the runway's north end.

Since 1998 the airport has been two-thirds privately owned by Infratil, with the remaining third owned by the Wellington City Council.

In late 2003 the airport installed a large statue of Gollum on the terminal in order to promote the world premiere of The Lord of the Rings: The Return of the King.

In April 2006, Air New Zealand and Qantas announced that they proposed to enter into a codeshare agreement, arguing that it would be necessary in order to reduce empty seats and financial losses on trans-Tasman routes. The airport counter-argued that the codeshare would stifle competition and passenger growth on Wellington's international flights, pointing to what it saw as a market duopoly dominated by Air New Zealand and Qantas. The codeshare was abandoned by the two airlines after it was rejected in a draft ruling by the ACCC in November 2006.

Fiji Airways began serving Wellington from Nadi on 25 June 2015. Jetstar launched its first international service in December 2014 from Wellington to the Gold Coast.

In mid-January 2016, rumours developed that Singapore Airlines will begin direct flights between Singapore and Wellington, stopping in Canberra. The service (dubbed the "Capital Express") was confirmed on 20 January. Flights began 21 September 2016, operating four times a week with Boeing 777-200 aircraft. It is Wellington's first direct flight to a destination outside Australia and the Pacific Islands. From April 2018, the Singapore Airlines flight began transiting via Melbourne rather than Canberra.

Air Movements Rongotai sits on the opposite side of the Wellington airport runway from the main passenger terminals, its main use being the facilitation of RNZAF flights and flights of overseas military forces. The current building was refurbished in the late 1980s when it housed not only the RNZAF Air movements unit but also 2 MCU (2nd Movements Control Unit) of the New Zealand Army. The role of 2 MCU was the logistic control and movement of defence personal and freight throughout New Zealand and abroad, utilising both civilian and military modes of transport.

Wellington Airport's access is only by road. The airport lies at the southern end of the North Island section of State Highway 1, which connects the airport to Wellington City via the Mount Victoria Tunnel. SH 1 then continues to the Wellington Urban Motorway, which takes traffic out of the city and further afield to Porirua and the Hutt Valley, and on to the Kapiti Coast and the Wairarapa. The distance from the airport to the city centre is roughly 8 km (5.0 mi). Several taxi and shuttle companies serve the airport.

One Metlink bus route service the airport. Route 2 (between the CBD and Miramar/Seatoun), which has a stop within a five-minute walk of the terminal. Connections to Porirua, Kapiti Coast and the Wairarapa require changing to a Metlink train at Wellington railway station.

All content from Kiddle encyclopedia articles (including the article images and facts) can be freely used under Attribution-ShareAlike license, unless stated otherwise. Cite this article:
Wellington Airport Facts for Kids. Kiddle Encyclopedia.