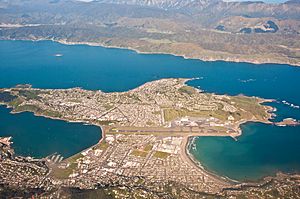 Wellington Airport in centre, with Miramar Peninsula beyond 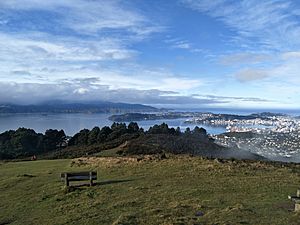 View of Miramar Peninsula from the peak of Mount Kaukau

The large Miramar Peninsula (Māori: Te Motu Kairangi) is on the southeastern side of the city of Wellington, New Zealand, at the entrance to Wellington Harbour, in Wellington's eastern suburbs. According to Māori legend, it was formed when the taniwha Whaitaitai beached as he tried to escape the confines of the harbour.

From above, the peninsula resembles the shape of a shark. Northwards, it juts into Wellington Harbour (formerly known as Port Nicholson, and in Māori as Te Whanganui-a-Tara, the Great Harbour of Tara). To the south are Cook Strait and the South Pacific Ocean. The suburbs of Kilbirnie, Lyall Bay, Hataitai and Newtown, and the inner city, lie to the west. To the east a narrow stretch of water connects Wellington Harbour with Cook Strait and the open sea; beyond this channel are the scrubby Eastbourne hills, and the high and forested Orongorongo Ranges. From the peninsula's high points, an observer can look north to the Hutt Valley and the Tararua Ranges, or southwest, across Cook Strait, to the high peaks of the Inland and Seaward Kaikoura Ranges, which are often snowbound in winter.

Physical description of the peninsula

The peninsula has an area of 800 hectares. The coastline is rocky, with many coves, steep cliffs, and small pinnacles and caves, but there are also sweeping and sandy beaches, notably at Breaker Bay, Worser Bay, Scorching Bay, Moa Point and Tarakena Bay. A high ridge, running on an approximate north/south axis, forms the spine of the peninsula, with high points Mount Crawford in the north and Beacon Hill in the south. The peninsula has a large area of low-lying land, the Miramar flats, and a smaller area of flat land at Seatoun, both of which are mainly covered in residential housing.

The peninsula is largely urbanized, with large suburbs of Miramar, Maupuia, Strathmore and Seatoun, and narrow strips of houses along the coast at Breaker Bay, Karaka Bay and Moa Point. The urban area is a mix of suburban housing, retail outlets, schools, light and service industries, recreation grounds (such as a golf course and sports fields), and Wellington airport. There are also extensive areas of regenerating native bush, pine forest, and remnant farmland, as well as urban gardens. A narrow two-lane road circles the peninsula, providing a picturesque route around the many bays, coves and headlands.

At the entrance to Wellington Harbour, the rocks of Barrett Reef lie close to the shore of the peninsula. On 10 April 1968 TEV Wahine, an inter-island ferry, foundered on Barrett Reef, and later capsized near Steeple Rock, a pinnacle just off Seatoun). 53 people were killed.

The peninsula is exposed to Wellington's prevailing northwest wind and the southerly wind. During southerly storms, big waves and swells batter the peninsula's rocky southern shore. The peninsula's topography, with its high ridges and small bays and coves, provides shelter from the wind to many places. On 15 August 2011, during a prolonged southerly storm, snow fell across the peninsula in the late morning, settling in light drifts on trees, streets and fields. Like other parts of Wellington, snowfall at sea level is a very rare occurrence.

There are a number of derelict military fortifications on the peninsula. From the late 19th century to the Second World War, the peninsula was an important component of an evolving coastal defence system, designed to protect the capital, harbour and hinterland from naval attack.

In an era when naval power was based mainly on battleships, Miramar's strategic position made it ideal for coastal guns to prevent enemy warships approaching, bombarding the city, and entering Wellington Harbour. Large coastal artillery fortifications were built at Fort Ballance in 1885, at Fort Dorset from 1908, and Palmer Head from 1936. In the Second World War, the advent of naval air power made these coastal fortifications largely redundant, because an enemy could carry out aerial attacks, using planes launched from aircraft carriers well beyond the range of even the largest shore-based guns.

Some of the fortifications are in reasonable condition, and can be readily accessed on foot. Fort Ballance, overlooking the channel, is a short walk from Scorching Bay or Mahanga Bay. These Victorian fortifications feature concrete gun emplacements, observation posts and underground rooms. At Breaker Bay, a trail runs along the low ridge above between the beach and Seatoun, passing two battery observation posts, a command post, and concrete foundations for artillery guns. At Point Halswell, the concrete emplacements for World War Two anti-aircraft guns and a command post can be reached from the Massey Memorial or a road running down from Mount Crawford. Nearby is a Victorian gun position at Kau Point, overlooking Wellington Harbour. At Palmer Head, a radar station is on the cliffs above Moa Point, looking out across Cook Strait, and is a short walk from Ahuriri Street.

Origin of the name 'Miramar'

"Miramar" means "sea view" in Spanish. The name was chosen by the first European to settle in the area, Scotsman James Coutts Crawford (1817-1889). Crawford was a former Royal Navy officer turned businessman and colonist, who arrived in Wellington in 1840. He established a farm on the peninsula, which at the time was known as Watt's Peninsula, and drained a large lagoon known to early European settlers as Burnham Water.

Cobham Drive is the main road connecting Miramar with the rest of Wellington city. It runs around the north end of Wellington Airport, at Evans Bay. Buses and trolleybuses run frequently between Miramar and the city, and the harbour ferry connects with places around Wellington harbour: Queens Wharf, Days Bay, Petone, and Matiu/Somes Island. A cycle trail runs from Miramar to the central city, starting at Burnham Wharf and continuing along Cobham Drive, Evans Bay Parade and Oriental Parade.

Film director Sir Peter Jackson has based his film production empire in Miramar, with studios, sound stages, and pre- and post-production facilities. Weta Workshop, involved in many movies directed by Sir Peter, such as The Lord of the Rings film trilogy, King Kong, and The Hobbit, is also in Miramar.

All content from Kiddle encyclopedia articles (including the article images and facts) can be freely used under Attribution-ShareAlike license, unless stated otherwise. Cite this article:
Miramar Peninsula Facts for Kids. Kiddle Encyclopedia.