The cluster of rocks that is Barrett Reef (often known as Barrett's Reef) is one of the most hazardous reefs in New Zealand. 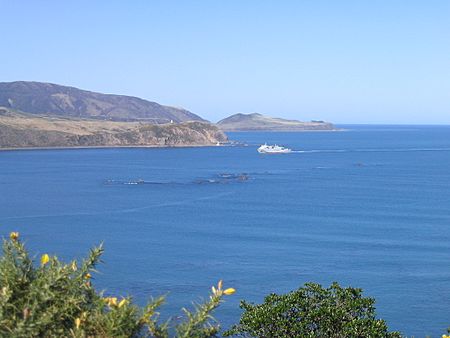 The reef, much of which is exposed even at high tide, is located to the west of the two-kilometre-wide channel that links Cook Strait with Wellington Harbour, close to the shore of the Miramar Peninsula. Due to the channelling effect of Cook Strait, which lies between the Pacific Ocean and the Tasman Sea, the currents are strong and fickle and gales are common. Add to this the volume of traffic which uses the channel (including several crossings daily of the inter-island ferries to Picton), and it is not surprising that the reef has a lengthy roll-call of shipwrecks.

History of vessels damaged, stranded, or wrecked on Barrett Reef

All content from Kiddle encyclopedia articles (including the article images and facts) can be freely used under Attribution-ShareAlike license, unless stated otherwise. Cite this article:
Barrett Reef Facts for Kids. Kiddle Encyclopedia.