It is the sixth-busiest airport in New Zealand by passenger numbers and seventh by aircraft movements, as well as being the busiest New Zealand airport without any scheduled international service. The airport has an Air New Zealand Koru Lounge. 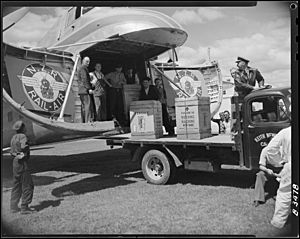 Construction of Nelson Airport commenced in 1937. In 2006, the airport received restricted international airport status and it has handled international private jets since then. The airport averages 60 commercial flights per day. The Airport precinct is home to 35 aeronautical and support businesses.

The airport has a single terminal building with 9 tarmac gates. A further 7 remote gates are located adjacent to the terminal.

In 2014, Nelson City Council deemed the main terminal of Nelson Airport an earthquake risk and at fault of possible liquefaction. The airport has been granted 10 years to upgrade the terminal to meet current building standards. The Nelson Airport management on 8 September 2015 have decided to rebuild the terminal instead of renovating the existing complex as this will best meet the growth needs in the future. It was also announced that due to increased airline activity strong passenger growth could be expected over the next two years. It is estimated that by the end of 2017 there could be more than 1 million passengers per annum and over 300 flights per week at the airport.

On December 6, 2017, the airport inaugurated 270 new parking spaces and new exit barrier arms (the latter located near Air New Zealand's hangar on Trent Drive) in order to help with traffic flow during the development and expansion phase mentioned above. 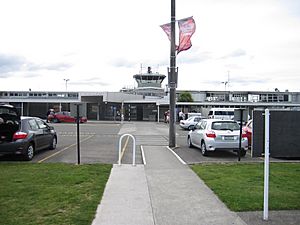 The former Nelson Airport terminal in 2012 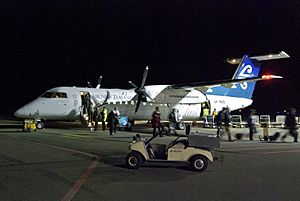 All content from Kiddle encyclopedia articles (including the article images and facts) can be freely used under Attribution-ShareAlike license, unless stated otherwise. Cite this article:
Nelson Airport (New Zealand) Facts for Kids. Kiddle Encyclopedia.