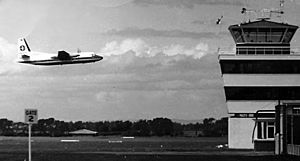 New Plymouth Airport (IATA: NPL, ICAO: NZNP) serves the city of New Plymouth, and the surrounding region of Taranaki. It is located on the west coast of New Zealand's North Island and is 11 km from the city centre, on State Highway 3 north to Auckland, and 4 km from the outer suburb/satellite town of Bell Block.

Jetstar Airways commenced daily services between New Plymouth and Auckland on 1 February 2016. Jetstar Airways had originally planned to conduct 27 weekly return flights between New Plymouth and Auckland, however only 20 return flights weekly were offered. The Jetstar flights were operated by Qantas Link's Eastern Australia Airlines. Jetstar cancelled those services at the end of November 2019.

From 29 September 2017, Originair began direct flights between New Plymouth and Nelson, New Zealand. On 30 September 2018, Originair launched direct flights between New Plymouth and Napier, New Zealand. The airline provided daily flights between the two cities. The company's British Aerospace 18-seat Jetstream aircraft flew the route and the company was adding another Jetstream to its operations to cover contracted charter flights, tours and maintenance coverage. Originair suspended those services at the end of November 2019 until the new terminal opened. Also, the handling company, Swissport, who has carrying out check-in and tarmac services for both Jetstar and Originair, terminated the service at the same time.

In terms of passenger numbers, it was the 9th busiest airport in New Zealand in 2016, with 411,661 people flying from or to the airport, a 20.3 percent increase on 2015 statistics. Jetstar's new regional services to New Plymouth were responsible for the significant increase, according to airport management. Hence, more people flew to New Plymouth than other cities with larger populations such as Hamilton and Tauranga. In October 2009, New Plymouth Airport was voted as the best regional airport in New Zealand and in September 2020 the airport was voted 2nd place in the Best Regional Airport poll conducted by Newshub.

The original airport opened in 1933 with the New Plymouth Airport Act. It had five runways, the longest of which was around 1,500 m (5,000 ft). During World War II, the airport became the RNZAF Bell Block Airbase. Les Munro, one of the pilots in the Dambusters Raid, soloed here on the Tiger Moth. Post war, the airport returned to civilian use, and was used by the New Zealand National Airways Corporation with links to Whenuapai (Auckland) and Paraparaumu (Wellington).

In line with a general improvement of New Zealand's infrastructure throughout the 1950s and 1960s, and the National Airways Corporation (NZNAC) acquisition of Fokker F27 Friendships, New Plymouth's airport was reviewed. In view of the undulating land, the need for a tarmac runway for the F27, and the clearer approach paths required, a new airfield was soon under construction at the end of Brown Road (recently renamed Airport Drive). During construction of the airport, a small hill at the west end of the runway had to be levelled off, due to take-off and landing path infringements. This was rather controversial, due to said hill being a Māori burial ground. The government of the day decided to go ahead with construction anyway, and despite protests, the hill was levelled. Part of it still remains. The airport opened in 1966, replacing a grass airfield 3 km southwest, which is now industrial land. The foundation stone from the original airport, and a stone commemorating RNZAF Bell Block, were moved to the new airport when it opened. 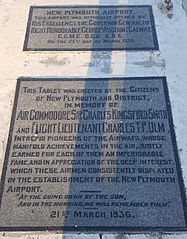 The original terminal was renovated during the 1990s. The observation deck upstairs was removed at this time, and the outside observation area was removed in 2005, due to rising security concerns worldwide.

In August 2015, when Jetstar announced they would commence services to New Plymouth in December 2015, the plans were delayed until 1 February 2016 to allow for a $1 million terminal building to be created at New Plymouth Airport dedicated to Jetstar's regional services. The main terminal building was too small for two commercial airline carriers and therefore a second building was required. Additional aircraft gates were also added.

New Plymouth Airport has a control tower with services provided by Airways Corporation. It is staffed from 6 am to around 8 pm on weekdays, and reduced hours on weekends, to coincide with airline traffic movements. There is also one fire rescue unit and another small emergency unit based at New Plymouth Airport.

The airport's only sealed taxiway connects the apron and the asphalt runway, so aircraft taxi on the runway, and commence take off roll from runway ends. New Plymouth Airport is infamous for crosswinds, due mostly to the fact that although the tarmac runway faces into the prevailing SSW wind the area regularly receives a strong SSE/SE. The cross runway is not sealed, and thus airline traffic is limited to the tarmac runway, parallel to the sea. The tarmac runway is equipped with low intensity runway lighting, runway end lighting, and Precision Approach Path Indicators. The sealed taxiway and apron are also lit. The airport has VOR/DME equipment. It was equipped with an NDB, but this was recently removed.

New Plymouth Aero Club and its Air New Plymouth charter service was based at the airport, until it ceased operations in 2014. Previously it carried out charter work and air ambulance services as well as providing a well recognised flight training facility.

General aviation aircraft are located at the airport as well as heritage De Havilland Vampire, an L-39 Albatross, four Yak 52s and a Catalina Flying Boat.

In 2017, a proposal for a $29 million airport terminal upgrade at New Plymouth Airport was given its final approval by the New Plymouth District Council.

The airport's terminal building opened in 1967 and was designed to handle just 60,000 passengers per year. In 2016, 411,661 people flew in and out of New Plymouth making it the 9th busiest airport in the country. In an uncommon move, councillors approved the most expensive option for the redevelopment which included cultural aspects in the design and rejected plans for a cheaper, more functional building without any arguing.

The new master plan proposed a major expansion of the terminal so it would have a floor area of 4092 square metres instead of the existing 1430 square metres. The terminal design featured separate arrival and departure gates, installing a larger mechanical baggage claim, a larger Air New Zealand lounge, more space for retail and the cafe, and the ability to create a passenger security area if required in the future.

The master plan also proposed a two-stage runway extension to better cater for larger ATR aircraft which are now regularly using the airport. The current runway length limits their operation under certain conditions so the proposal is for an initial extension to 1500m and then potentially to 1700m.

New Plymouth Airport opened the new terminal building to its first flight on Tuesday 17 March 2020. The new terminal can cater for up to 650,000 people and includes a new retail space, a convenience grab and go offering, and the café/bar Airspresso. The modular design of the new building allows for expansion as passenger numbers increase year to year. As part of the works an airside viewing area has been created to the east of the new building which will enhance the customer experience by providing non-passengers the ability to see the airside view of the terminal building.

All content from Kiddle encyclopedia articles (including the article images and facts) can be freely used under Attribution-ShareAlike license, unless stated otherwise. Cite this article:
New Plymouth Airport Facts for Kids. Kiddle Encyclopedia.