The Airport is about 8–10 minutes drive from the city centre, 15 minutes from the suburb of Gungahlin and 10 minutes from Queanbeyan. Travel times can be much longer at peak times due to traffic congestion.

The land is currently divided into five areas:

The airport was built in the 1920s, not long after the National Capital site was decided. In 1939, the Royal Australian Air Force (RAAF) took over the airport, but kept an area for civil aviation.

On 13 August 1940, in Canberra air disaster, a RAAF Lockheed Hudson flying from Melbourne crashed into a small hill east of the airport. Four crew and six passengers were killed. The Chief of the General Staff and three Federal Government ministers were among the dead. James Fairbairn, Minister for Air and Civil Aviation, also died. The Fairbairn Airbase was named after him. In 1962 the military side of the Airport was renamed RAAF Base Fairbairn. The north-east part of the Airport is called the Fairbairn Business Park. 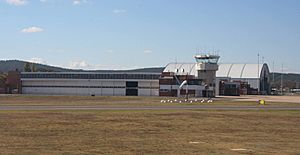 The hangars and air traffic control tower of Defence Establishment Fairbairn, viewed from the main runway. 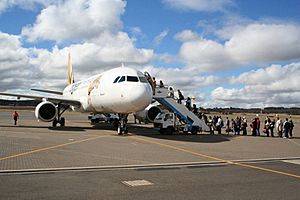 Canberra International Airport Pty Ltd took over the airport in 1998. They leased the RAAF area to the Department of Defence. It was closed as a RAAF base in 2003, (although No. 34 Squadron RAAF remains based there). The RAAF area was renamed Defence Establishment Fairbairn.

Redevelopment of the Airport, including new terminal buildings, started in 1998. In early December 2007, plans were announced to construct a new terminal, but these plans were placed on hold in late 2008. A 600m extension to the airport's runway and upgrades to runway systems were completed in 2006.

All content from Kiddle encyclopedia articles (including the article images and facts) can be freely used under Attribution-ShareAlike license, unless stated otherwise. Cite this article:
Canberra International Airport Facts for Kids. Kiddle Encyclopedia.