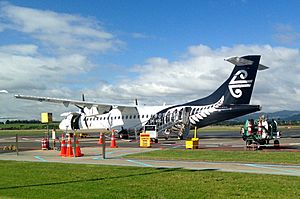 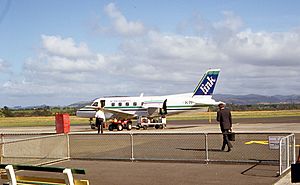 Tauranga Airport (IATA: TRG, ICAO: NZTG) is an airport serving the city of Tauranga, New Zealand. It is located adjacent to Tauranga Harbour in the suburb of Mount Maunganui, approximately 3 km northeast of Tauranga CBD. The terminal is located to the north of the runway, on Jean Batten Drive, and consists of a two-storey building with four tarmac gates. Air New Zealand serves the airport through its subsidiaries Mount Cook Airline and Air Nelson, with flights to Auckland, Wellington and Christchurch. A further two regional airlines also operate to the airport, as well as scenic and charter flights, skydiving operations and general aviation.

In 1935, the Tauranga Aero Club leased land adjacent to Tauranga Harbour in Mount Maunganui to establish an aerodrome. Up until then, the only airfield serving the town was a runway on the eastern side of the Waikareao Estuary which was only usable during low tide, and it was deemed that a permanent facility was going to be necessary in order to cater for demand in the growing region. The airport opened in 1939 to great celebrations and, later the same year, it was taken over by the Royal New Zealand Air Force, due to the onset of World War II. During the period of military use, the runways were extended and a hangar was constructed, and the airport was predominantly used as a training station for pilots. The airport was returned to the Tauranga Aero Club in 1945, and in 1946 the club began passenger flights from Tauranga to Motiti Island, and later added flights to Matakana Island. In 1947, the New Zealand National Airways Corporation, commonly known as NAC, began passenger flights to the airport.

From June 1966 until August 1967, the main runway was closed for sealing and throughout this period larger aircraft, including those operated by NAC, were unable to serve the airport. During the closure, Adastra Aviation operated fights from Tauranga to Auckland and Rotorua using aircraft small enough to use the secondary runways. When the sealing work was completed in August 1967, NAC flew Fokker Friendship aircraft to Tauranga for the first time. In 1978, Air New Zealand took over passenger services to the airport, after merging with NAC.

In 1998, the airport, now under the ownership of the Tauranga District Council, extended its runway to the east to reach its current length of 1,825m. In the following years, the terminal was enlarged and upgraded, with a second storey added containing a Koru Club regional lounge and a conference room.

In October 2007, Air New Zealand launched flights to Christchurch, operated by its subsidiary Air Nelson, to supplement its existing flights to Auckland and Wellington which were operated by both Air Nelson and Eagle Airways. Those subsidiaries were operated by a 50-seat Bombardier Q300 and a 19-seat Beech 1900D aircraft. Air New Zealand used to operate a 33-seat Saab 340A aircraft from Auckland and Wellington but then the Saab 340A was replaced by the Bombardier Q300.

In 2010 the airport undertook a further expansion of the terminal which took 6 months, and included larger check in and baggage claim areas as well as an expansion of the terminal by 830 square metres. The apron was also expanded to allow a fourth parking spot for overnight aircraft. In January 2013, Air New Zealand started using its subsidiary Mount Cook Airlines, which operates 68 seat ATR 72 aircraft on selected flights. During 2016 the short lived Kiwi Regional Airlines served Tauranga from Dunedin via Nelson with a 34-seat Saab 340A aircraft.

There are several scenic and charter airlines based at the airport as well as extensive skydiving, glider and helicopter operations. The airport is home to a large number of general aviation aircraft, the majority of which is stored in hangars to the east and northwest of the terminal.

Tauranga Airport has been the host of the biennial Sportavex fly-in and airshow since 2004. From 2010 this became part of a larger event, the Tauranga City Airshow, which is run by the local Classic Flyers museum and is also known as Classics of the Sky.

In 2006, a feasibility study was conducted to investigate the possibility of building a new airport at Paengaroa or Pyes Pa, serving both Tauranga and Rotorua, in an attempt to attract more services to the region, including international flights. However, it was determined that Tauranga Airport had yet to reach full operational capacity, and the cost and inconvenient location of a potential new airport meant that the idea was dropped.

All content from Kiddle encyclopedia articles (including the article images and facts) can be freely used under Attribution-ShareAlike license, unless stated otherwise. Cite this article:
Tauranga Airport Facts for Kids. Kiddle Encyclopedia.