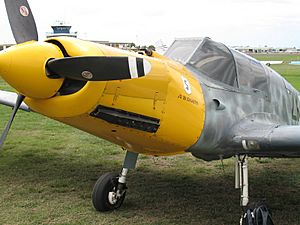 The Tauranga City Airshow is a biennial show held in Tauranga, New Zealand. It features displays of classic, private, and military aircraft.

Tauranga Airport has hosted airshows regularly since its inception, and in particular since 1946 when its first commercial services started. The airshows have regularly involved the local aviation community, including the Tauranga Aero Club, the local flight training schools, and recently the SAA-Sport Aircraft Association . The Royal New Zealand Air Force have been regular attendees with their Red Checkers aerobatics displays.

The Classic Flyers Museum is situated on the airfield itself, and features a range of flying aircraft and static displays.

The single seater Hawker Hunter based at the Classic Flyers Museum is a regular performer at the show. There is also a non-flying two seater model on display.

The Cessna A-37 Dragonfly owned by The Historic Aircraft Trust comes from the Vietnam era and featured in the 2008 Airshow.

The De Havilland Devon owned by The Historic Aircraft Trust.

The Douglas DC-3 owned by The Historic Aircraft Trust. 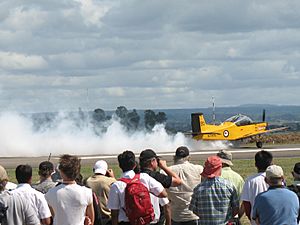 The Sports Aircraft Association regularly gather over 100 sports and homebuilt aircraft from throughout New Zealand.

In addition to the military aircraft on display, the show also includes a variety of military vehicles and equipment from the Tauranga Military Museum, also located on the Airport. The equipment display is complemented by the participation of the local Military Re-enactors who dress in up period uniform, and perform mock battles with the military aircraft performing at the show.

A recent addition is the appearance of hot-air balloons, with attendees being able to ascend under tether to gain a bird's-eye view of the show.

A display from the local members of the New Zealand Parachute Industry.

All content from Kiddle encyclopedia articles (including the article images and facts) can be freely used under Attribution-ShareAlike license, unless stated otherwise. Cite this article:
Tauranga City Airshow Facts for Kids. Kiddle Encyclopedia.