The museum has a range of flying and static aircraft displays as well as a cafe.

The museum was started in 2000 when several local businessmen, who were also aviation enthusiasts, decided to see if an existing World War II-era hangar at the Tauranga Airfield could be renovated for use. The hangar proved to be unsalvageable but the group decided to build a new facility instead and formed the Bay of Plenty Classic Aircraft Trust. The new hangar is at the entrance to the Tauranga Airport, on Jean Batten Drive, Mount Maunganui.

The founders decided to focus on creating a flying museum, as opposed to one that just had static displays, with the intention of having a high number of museum aircraft movements.

The museum was officially opened on Saturday 28 May 2005 with an air display and fly-past. 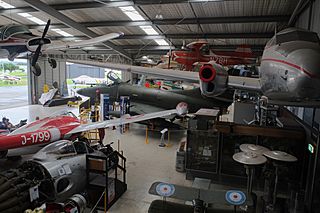 Inside the main hangar

Currently, the museum is spread across three adjacent hangars, the first of which houses the visitor centre, cafe, and most of the museum exhibits, while the other two accommodate the bulk of the classic aircraft in working flying condition.

Additional airplanes are on display outside the hangars. One of them is an old New Zealand National Airways Corporation DH-Heron, which is open to the public, but not in airworthy condition.

The museum aims are:

The Trust focuses on preserving aircraft and memorabilia that has a connection to the Bay of Plenty area or New Zealand generally.

The museum also has exhibits on loan from Andy Moreland's Tauwhare Military Museum in a "M*A*S*H Chopper Hangar" that is located behind the main museum building. This collection includes Unimog vehicles, Jeeps, uniforms and weapons.

All content from Kiddle encyclopedia articles (including the article images and facts) can be freely used under Attribution-ShareAlike license, unless stated otherwise. Cite this article:
Classic Flyers Museum Facts for Kids. Kiddle Encyclopedia.