Rotorua ( from Māori: Te Rotorua-nui-a-Kahumatamomoe, "The second great lake of Kahumatamomoe") is a city on the southern shores of the lake of the same name, in the Bay of Plenty Region of New Zealand's North Island. It is the seat of the Rotorua District, a territorial authority encompassing Rotorua and several other nearby towns. The majority of the Rotorua District is in the Bay of Plenty Region, but a sizeable southern section and a small western section are in the Waikato Region. Rotorua is in the heart of the North Island, 60 kilometres (37 miles) south of Tauranga, 80 km (50 mi) north of Taupo, 105 km (65 mi) east of Hamilton, and 230 km (140 mi) southeast of the nation's most populous city, Auckland.

Rotorua is a major destination for both domestic and international tourists; the tourism industry is by far the largest industry in the district. It is known for its geothermal activity, and features geysers – notably the Pohutu Geyser at Whakarewarewa – and hot mud pools. This thermal activity is sourced to the Rotorua caldera, on which the town lies. Rotorua is home to the Waiariki Institute of Technology.

The Lakes of Rotorua are a collection of many lakes surrounding Rotorua.

The name Rotorua comes from Māori, the full name being Te Rotorua-nui-a-Kahumatamomoe; roto means lake and rua two – Rotorua thus meaning 'Second lake'. Kahumatamomoe was the uncle of the Māori chief Ihenga, the ancestral explorer of the Te Arawa. It was the second major lake the chief discovered, and he dedicated it to his uncle. It is the largest of a multitude found to the northeast, all connected with the Rotorua Caldera and nearby Mount Tarawera. The name can also mean the equally appropriate 'crater lake'.

The area was initially settled by Māori of the Te Arawa iwi. The first European in the area was probably Phillip Tapsell who was trading from the Bay of Plenty coast at Maketu from 1828. He later married into Te Arawa and became highly regarded by them. Missionaries Henry Williams and Thomas Chapman visited in 1831 and Chapman and his wife established a mission at Te Koutu in 1835. This was abandoned within a year but Chapman returned in 1838 and established a second mission at Mokoia Island.

The lakeshore was a prominent site of skirmishes during the New Zealand Wars of the 1860s. A "special town district" was created in the 1883, to promote Rotorua's potential as a spa destination. The town was connected to Auckland with the opening of the Rotorua Branch railway and commencement of the Rotorua Express train in 1894, resulting in the rapid growth of the town and tourism from this time forward. Rotorua was established as a borough in 1922, elected its first mayor in 1923, and declared a city in 1962 before becoming a District in 1979.

A panoramic view of Rotorua taken at the top of Mt Ngongotaha, December 2015

The area of Rotorua has a relatively high altitude, measuring up to 290m or 950 ft. The Rotorua region enjoys a mild temperate climate. Rotorua is situated inland from the coast and is sheltered by high country to the south and east of the city, resulting in less wind than many other places in New Zealand. During the winter months June – August temperatures can drop well below 0 °C and in recent years Rotorua witnessed snow fall in 2011, the first time in over 50 years. 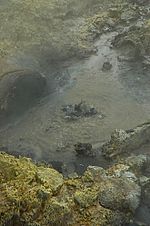 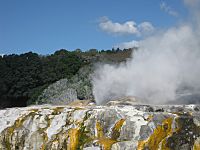 Thermal activity is at the heart of much of Rotorua's tourist appeal. Geysers and bubbling mud pools, hot thermal springs and the Buried Village (Te Wairoa) — so named after it was buried by the 1886 Mount Tarawera eruption— are within easy reach of Rotorua.

In Kuirau Park, to the west end of Rotorua, hot bubbling mud pools dot the park. Visitors can soak their feet in hot pools.

Rotorua has the nickname Sulphur City, because of the hydrogen sulphide emissions, which gives Rotorua a "rotten eggs" smell, as well as rotten-rua combining its legitimate name and the rotten smell prevalent.

The especially pungent smell in the central-east 'Te Ngae' area is due to the dense sulphur deposits located next to the southern boundary of the Government Gardens, in the area known as 'Sulphur Point'.

The Rotorua region has 17 lakes, known collectively as the Lakes of Rotorua. Fishing, waterskiing, swimming and other water activities are popular in summer. The lakes are also used for event venues; Rotorua hosted the 2007 World Waterski Championships and Lake Rotorua was the venue for the World Blind Sailing Championships in March 2009. Lake Rotorua is also used as a departure and landing point for float planes.

Rotorua is also home to botanical gardens and historic architecture. Known as a spa town and major tourist resort since the 1800s, many of its buildings hint at this history. Government Gardens, close to the lakeshore at the eastern edge of the town, are a particular point of pride. The Rotorua Museum of Art and History is housed in the large Tudor-style bath house building while the Art Deco style Blue Baths, noted for their embrace of mixed sex bathing in the 1930s, remain open today.

Another of Rotorua's attractions is mountain biking. Whakarewarewa Forest was listed as one of the Top 8 locations globally by Red Bull Magazine in 2012.

The Rotorua Pistol club is among the largest in the Southern Hemisphere and hosted the 2013 Australasian IPSC Handgun Championship.

The region is home to 16 lakes. These are popular for recreation such as boating and fishing. Several of the lakes are stocked for sports fishing with trout from the Fish and Game New Zealand hatchery at Ngongotaha.

Rotorua is served by state highways 5, 30, and 30A, and the Thermal Explorer Highway touring route, with state highways 33 and 36 terminating on the outskirts of the town.

State Highway 30 runs southwest to northeast through the town. It enters the town in the southwest (running concurrently with SH 5), before crossing the southern suburbs to the shore of Lake Rotorua east of the town centre. It then runs through the suburb of Te Ngae, before splitting off SH 33 to continue eastwards.

State Highway 30A runs northwest to southeast, connecting State Highways 5 and 30 with each other via the town centre.

Rotatua has a 12 part bus public transport, and Buses between local cities branded as NakedBus and other names

Scenic and chartered flights in both helicopters and float planes are operated by Volcanic Air who are based on Rotorua's lake front.

From 2009 to 2015 there was also an international link, with direct Sydney to Rotorua flights.

Rotorua is connected to the rail network by the Rotorua Branch line from Putaruru. Up until 2001, passenger trains ran from Auckland to Rotorua via Hamilton daily using Silver Fern railcars, terminating north of the town centre at Koutu (the original station on Amohau Street was closed and relocated to Koutu in 1989). However, owing to poor advertising of the service and the location of the station being a 15-minute walk from the town centre in an industrial area, passenger services stopped in October 2001. Freight services on the line declined over the decades up until the nightly freight service stopped in 2000, largely due to a continual move of freight and passengers onto road transport using ever-improving highways in the region. The line is currently disused.

All content from Kiddle encyclopedia articles (including the article images and facts) can be freely used under Attribution-ShareAlike license, unless stated otherwise. Cite this article:
Rotorua Facts for Kids. Kiddle Encyclopedia.