Te Wairoa was a village, now a ghost town that is also known as the Buried Village, close to the shore of Lake Tarawera in New Zealand's North Island. It was a Māori and European settlement founded in 1848 by the Revd Seymour Mills Spencer where visitors would stay on their way to visit the Pink and White Terraces. The village was destroyed by the eruption of the volcano Mount Tarawera on June 10, 1886. 120 people died in the eruption, many of them in other villages closer to the volcano. The site of one of these villages (Kokotaia) was instrumental in the recent rediscovery of the Pink and White Terrace locations.

A Māori meeting house named Hinemihi which provided shelter to the people of Te Wairoa village during the eruption was relocated in 1892 to Clandon Park as an ornamental garden building and a souvenir of William Onslow, 4th Earl of Onslow.

The Buried Village is open to the public and shows the excavated ruins of the village, recovered relics on display in a museum and the history of the eruption. It is located 14 kilometres southeast of Rotorua on Tarawera Road.

The New Zealand Ministry for Culture and Heritage gives a translation of "the long stream" for Te Wairoa. 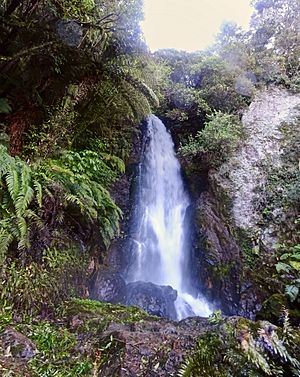 Te Wairoa Stream flows on the southern edge of the village and over the Wairere Falls. The stream links Lake Rotokakahi (394 m (1,293 ft)) with Lake Tarawera (298 m (978 ft)). Visitors to Te Wairoa may descend the falls via a trail with steps.

All content from Kiddle encyclopedia articles (including the article images and facts) can be freely used under Attribution-ShareAlike license, unless stated otherwise. Cite this article:
Te Wairoa, New Zealand Facts for Kids. Kiddle Encyclopedia.