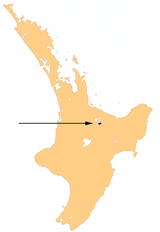 Lake Tarawera is the largest of a series of lakes which surround the volcano Mount Tarawera in the North Island of New Zealand. Like the mountain, it lies within the Okataina caldera. It is located 18 kilometres (11 mi) to the east of Rotorua, and beneath the peaks of the Tarawera massif i.e. Wahanga, Ruawahia, Tarawera and Koa. The lake's surface area is 39 square kilometres (15 sq mi).

The lake was substantially affected by the eruption of Mount Tarawera on 10 June 1886. The lake outlet was blocked for two decades and the lake level increased. The eruption killed over 150 people, and buried the Māori village of Te Wairoa on the southwest shore of the lake. 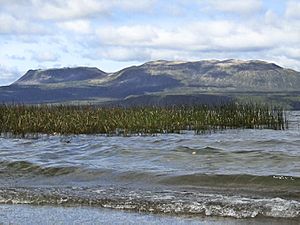 Lake Tarawera, with Mount Tarawera standing behind it

Also assumed destroyed were the famed Pink and White Terraces. However, in February 2011 a team mapping the lake floor discovered what appeared to be part of the Pink Terraces. The lowest two tiers of the terraces were reportedly found in their original place at 60 metres (200 ft) deep (too deep for scuba diving without special gas gear). Subsequently, a portion of the White Terraces was reportedly rediscovered in June 2011. The announcement of the rediscovery of the White Terraces coincided with the 125th anniversary of the eruption of Mt. Tarawera in 1886. It was thought that the rest of the terraces may be buried in sediment rather than having been destroyed.

More recent research questions these earlier findings and reports the Pink and White terrace spring sites instead lie on land (along with a lesser-known Black Terrace spring).

Tarawera means "Burnt Spear", named by a visiting hunter who left his bird spears in a hut and on returning the following season found both the spears and hut had been burned down completely.

The lake is filled primarily by water flowing through the volcanic rocks and ashes, only about 42% being from water flowing in streams, etc. The flows are estimated to be - 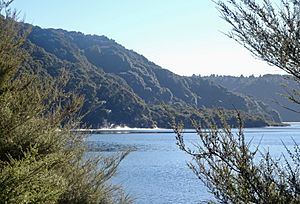 Lake Tarawera is home to eels and rainbow trout. During the summer it is popular for both fishing and water sports, and also camping as there a number of hot water beaches.

The main hot water sources are in the southern section of the lake at the Wairua Stream, Hot Water Beach and Te Puha and Tarawera fumaroles. There is also a small geothermal area at Humphrey's Bay, to the south of Lake Okataina. Water varies between 37 °C (99 °F) and 90 °C (194 °F).

Lake Tarawera's outflow is at its north east end, into the Tarawera River, which flows northeast into the Bay of Plenty.

All content from Kiddle encyclopedia articles (including the article images and facts) can be freely used under Attribution-ShareAlike license, unless stated otherwise. Cite this article:
Lake Tarawera Facts for Kids. Kiddle Encyclopedia.