Kids Encyclopedia Facts
For other places with the same name, see Tarawera (disambiguation).

Mount Tarawera is a volcano on the North Island of New Zealand. Located 24 kilometres southeast of Rotorua, it consists of a series of rhyolitic lava domes that were fissured down the middle by an explosive basaltic eruption in 1886. This eruption was one of New Zealand's largest historical eruptions, and killed an estimated 120 people. The fissures run for about 17 kilometres northeast-southwest.

The volcano's component domes include Ruawahia Dome (the highest at 1,111 metres), Tarawera Dome and Wahanga Dome. It is surrounded by several lakes, most of which were created or drastically altered by the 1886 eruption. These lakes include Lakes Tarawera, Rotomahana, Rerewhakaaitu, Okataina, Okareka, Tikitapu (Blue Lake) and Rotokakahi (Green Lake). The Tarawera River runs northeastwards across the northern flank of the mountain from Lake Tarawera. In 2000, the mountain was ceded to the Ngati Rangitihi sub-tribe of Te Arawa. In 2002, the new owners and their lessee stopped previously free public access to the mountain. This caused angst among Rotorua residents.

Mount Tarawera erupted around 1315 in the Kaharoa eruption. The ash thrown from this event may have affected temperatures around the globe and precipitated the Great Famine of 1315–17 in Europe. 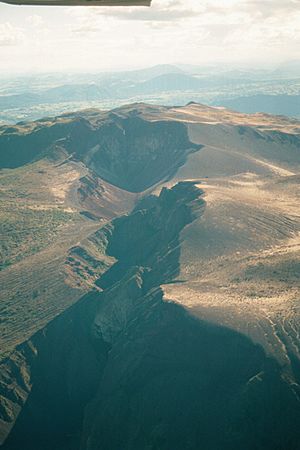 Shortly after midnight on the morning of 10 June 1886, a series of more than 30 increasingly strong earthquakes were felt in the Rotorua area and by 2:45 am Mount Tarawera's three peaks had erupted, blasting three distinct columns of smoke and ash thousands of metres into the sky At around 3.30 am, the largest phase of the eruption commenced; vents at Rotomahana produced a pyroclastic surge that destroyed several villages within a 6 kilometer radius, and the Pink and White Terraces appeared to be obliterated. Recent research using mathematical modelling of events during the later Rotomahana eruption phase, is consistent with eyewitness accounts; describing it resembling a pot boiling over. 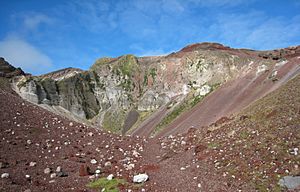 The Ngati Rangitihi and Tuhourangi settlements around the Ariki arm of Lake Tarawera i.e. Moura, Koutu, Kokotaia, Piripai, Pukekiore and Otuapane: along with Tapahoro, Te Wairoa, Totarariki, and Waingongoro, were buried or destroyed. The official death toll was reported as 153, and many more were displaced, making the eruption the most deadly in New Zealand history. The survivors became refugees in their own country, for generations.

The eruption also buried many Māori villages, including Te Wairoa, which has now become a tourist attraction called "the buried village of Te Wairoa". The world-famous Pink and White Terraces were thought lost. A small portion of the Pink Terraces was reportedly rediscovered under Lake Rotomahana 125 years later. Over 2016-2019, the previously unknown 1859 survey of Lake Rotomahana by Ferdinand Hochstetter was deciphered and published. These unique primary data indicate the Pink, Black and White Terrace locations now lie along the present lake shores. There is a prospect the terraces or sections of them, may lie buried. They can no longer be assumed destroyed. 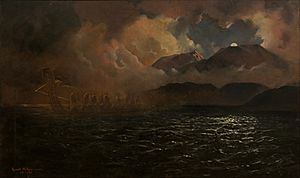 The Phantom Canoe: A Legend of Lake Tarawera, by Kennett Watkins

One legend surrounding the 1886 eruption is that of the phantom canoe. Eleven days before the eruption, a boat full of tourists returning from the Terraces saw what appeared to be a war canoe approach their boat, only to disappear in the mist half a mile from them. One of the witnesses was a clergyman, a local Maori man from the Te Arawa iwi. Nobody around the lake owned such a war canoe, and nothing like it had been seen on the lake for many years. It is possible that the rise and fall of the lake level caused by pre-eruption fissures had freed a burial waka (canoe) from its resting place. Traditionally, dead chiefs were tied in an upright position. A number of letters have been published from the tourists who experienced the event.

Though skeptics maintained that it was a freak reflection seen on the mist, tribal elders at Te Wairoa claimed that it was a waka wairua (spirit canoe) and was a portent of doom. It has been suggested that the waka was actually a freak wave on the water, caused by seismic activity below the lake, but locals believe that a future eruption will be signaled by the reappearance of the canoe.

All content from Kiddle encyclopedia articles (including the article images and facts) can be freely used under Attribution-ShareAlike license, unless stated otherwise. Cite this article:
Mount Tarawera Facts for Kids. Kiddle Encyclopedia.