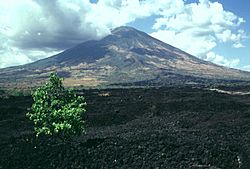 This lava flow was erupted from a fissure vent

A fissure vent, also known as a volcanic fissure or eruption fissure, is a kind of volcano through which lava erupts. The crack is usually linear (follows a fairly straight line). It is often a few meters wide and may be many kilometers long. Fissure vents can cause large flood of lava and later lava tubes. After some time the eruption cools down gradually and builds up craters. 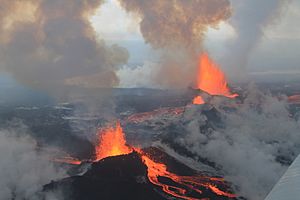 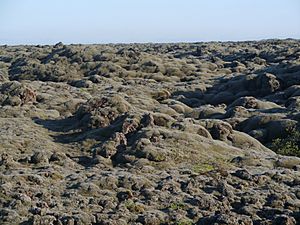 Eldhraun, a lava field produced by the Laki craters

In Iceland, volcanic vents, which can be long fissures, often open parallel to the rift zones where the Eurasian and the North American Plate lithospheric plates are diverging, a system which is part of the Mid-Atlantic Ridge. Renewed eruptions generally occur from new parallel fractures offset by a few hundred to thousands of metres from the earlier fissures. This distribution of vents and sometimes voluminous eruptions of fluid basaltic lava usually build up a thick lava plateau rather than a single volcanic edifice. But there are also the central volcanoes, composite volcanoes, often with calderas, which have been formed during thousands of years and eruptions with one or more magma reservoirs undeneath controlling their resp. fissure system.

The Laki fissures, part of the Grímsvötn volcanic system, produced one of the biggest effusive eruptions on earth in historical times, in the form of a flood basalt of 12–14 km³ of lava. During the Eldgjá eruption A.D. 934-40, another very big effusive fissure eruption in the volcanic system of Katla in South Iceland, ~18 km³ (4.7 mi³) of lava were released. In September 2014, a fissure eruption is ongoing on the site of the 18th century lava field Holuhraun. The eruption is part of an eruption series in the Bárðarbunga volcanic system. 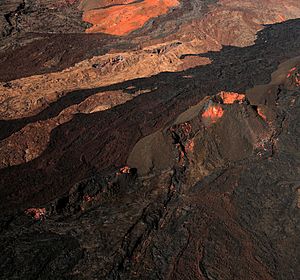 The radial fissure vents of Hawaiian volcanoes also produce “curtains of fire” as lava fountains erupting along a portion of a fissure. These vents build up low ramparts of basaltic spatter on both sides of the fissure. More isolated lava fountains along the fissure produce crater rows of small spatter and cinder cones. The fragments that form a spatter cone are hot and plastic enough to weld together, while the fragments that form a cinder cone remain separate because of their lower temperature.

All content from Kiddle encyclopedia articles (including the article images and facts) can be freely used under Attribution-ShareAlike license, unless stated otherwise. Cite this article:
Fissure vent Facts for Kids. Kiddle Encyclopedia.