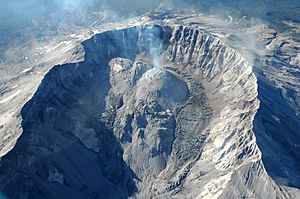 Lava domes in the crater of Mount St. Helens.

In volcanology, a lava dome or plug dome is a round-shaped mound created by the eruption of viscous lava by a volcano.

Lava domes are formed when erupting lava is too thick to flow and makes a steep-sided mound as the lava piles up near the volcanic vent. Lava domes have formed in Mount St. Helens and experts say a lava dome is growing inside the Shinmoedake volcano in Japan.

All content from Kiddle encyclopedia articles (including the article images and facts) can be freely used under Attribution-ShareAlike license, unless stated otherwise. Cite this article:
Lava dome Facts for Kids. Kiddle Encyclopedia.