Use of Valles Caldera dates back to the prehistoric times: spear points dating to 11,000 years ago have been discovered. Several Native American tribes frequented the caldera, often seasonally for hunting and for obsidian, used for spear and arrow points. Obsidian from the caldera was traded by tribes across much of the Southwest. Eventually, Spanish and later Mexican settlers as well as the Navajo and other tribes came to the caldera seasonally for grazing with periodic clashes and raids. Later as the United States acquired New Mexico as part of the Treaty of Guadalupe Hidalgo in 1848, the caldera became the backdrop for the Indian wars with the U.S Army. Around the same time, the commercial use of the caldera for ranching, and its forest for logging began.

The caldera became part of the Baca Ranch in 1876. The Bacas were a wealthy family given the land as compensation for the termination of a grant given to their family near Las Vegas, in northeastern New Mexico. The family was given several other parcels by the US Government as well, including one in Arizona. This area, 100,000 acres, was called Baca Location number one. Since then, the land has been through a string of exchanges between private owners and business enterprises. Most notably, it was owned by Frank Bond in the 1930s. Mr. Bond, a businessman based in nearby Española, ran up to 30,000 sheep in the calderas, significantly overgrazing the land and causing damage from which the watersheds of the property are still recovering.

The land was purchased by the Dunigan family from Abilene, Texas in 1963. Pat Dunigan did not obtain the timber rights, however, and the New Mexico Lumber Company logged the property very heavily, leaving the land scarred with roads and removing significant amounts of old-growth douglas fir and ponderosa pine. Mr. Dunigan bought out the timber rights in the 1970s and slowed the logging. He negotiated unsuccessfully with the National Park Service and the US Forest Service for possible sale of the property in the 1980s. 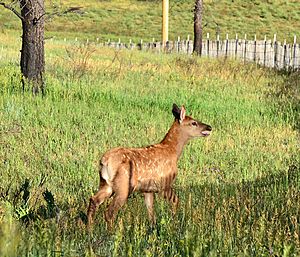 The Valles Caldera Preservation Act of 2000 signed by President Clinton on July 25, 2000, created the Valles Caldera National Preserve (VCNP). The legislation provided for the federal purchase of this historical ranch nestled inside a volcanic caldera, with funds coming from the Land and Water Conservation Fund (LWCF) derived from royalties the US government receives from offshore petroleum and natural gas drilling. The Dunigan family sold the entire surface estate of 95,000 acres (380 km2) and seven-eighths of the geothermal mineral estate to the federal government for $101 million. As some sites of the Baca Ranch are sacred and of cultural significance to the Native Americans, 5,000 acres (20 km2) of the purchase were obtained by the Santa Clara Pueblo, which borders the property to the northeast. This include the headwaters of Santa Clara Creek that is sacred to the pueblo. On the southwest corner of the land 300 acres (1.2 km2) were to be ceded to Bandelier National Monument.

In July 2011, the Las Conchas Fire started by a power line on nearby private land, burned 30,000 acres (120 km2) of the Valles Caldera National Preserve. The wildfire burned a total of 158,000 acres (640 km2) in the Jemez Mountains, including most of neighboring Bandelier National Monument.

Panoramic view of the Valles Caldera, from the south east rim; in the distance you can see Redondo Peak (a resurgent dome) and the rhyolite lava dome of Cerro la Jara on the far left 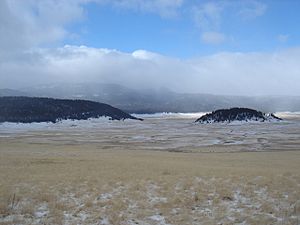 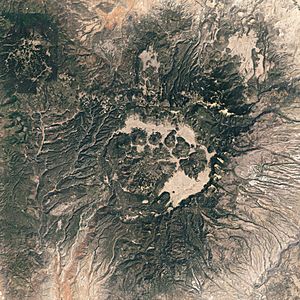 Valles Caldera is one of the smaller volcanoes in the supervolcano class. The circular topographic rim of the caldera measures 13.7 miles (22.0 km) in diameter. The caldera and surrounding volcanic structures are one of the most thoroughly studied caldera complexes in the United States. Research studies have concerned the fundamental processes of magmatism, hydrothermal systems, and ore deposition. Nearly 40 deep cores have been examined, resulting in extensive subsurface data.

Valles Caldera is the younger of two calderas known at this location, having collapsed over and buried the older Toledo Caldera, which in turn may have collapsed over yet older calderas. The associated Cerros del Rio volcanic field, which forms the eastern Pajarito Plateau and the Caja del Rio, is older than the Toledo Caldera. These two large calderas formed during eruptions 1.47 million and 1.15 million years ago. The caldera and surrounding area continue to be shaped by ongoing volcanic activity. The El Cajete Pumice, Battleship Rock Ignimbrite, Banco Bonito Rhyolite, and the VC-1 Rhyolite were emplaced during the youngest eruption of Valles Caldera, about 50,000–60,000 years ago. Seismic investigations show that a low-velocity zone lies beneath the caldera, and an active geothermal system with hot springs and fumaroles exists today.

These calderas and associated volcanic structures lie within the Jemez Volcanic Field. This volcanic field lies above the intersection of the Rio Grande Rift, which runs north-south through New Mexico, and the Jemez Lineament, which extends from southeastern Arizona northeast to western Oklahoma. The volcanic activity here is related to the tectonic movements of this intersection.

The volcanic properties of Valles Caldera make it a likely source for renewable and nonpolluting geothermal energy. However, some people oppose the development of geothermal energy, considering it destructive to its scenic beauty, recreational and grazing use. Its impact on the hot springs and supplying aquifers is unknown as experiences from other past geothermal projects proved that production of reservoir fluids had dramatic impacts to the surface thermal features. 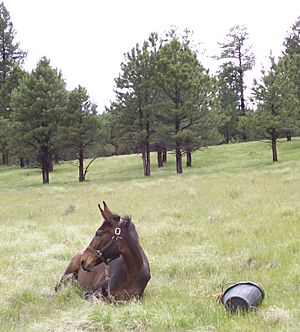 A mule resting in Valle Jaramillo during an endurance race; trees in the background lack lower branches due to browsing.

A number of recreational and/or historical uses take place in Valles Caldera. Many of these uses involve trails. Valles Caldera has many miles of ranch roads, livestock and game trails. These include a network of trails currently designated for horse riding. Historically, Valles Caldera was a location for equestrian endurance races. After establishment of VCNP, the first race in the caldera was held in 2009. The largest grass valley, Valle Grande, is a venue for ski orienteering. Activities are open to the public, though some require reservations. Customer service and concierge services are provided by the Public Lands Interpretive Association.

Throughout the caldera, the grass valleys appear groomed: there are few saplings and mature trees lack lower branches. This is due to heavy browsing by elk and cattle and because of frequent grass fires of human and natural origin which kill the lower branches on the Engelmann spruce, Douglas-fir and Ponderosa pine that populate the uplands around the grasslands dominating the bottoms of the calderas. Extreme cold in winter prevents tree growth in the bottoms of the calderas. The grasslands were native perennial bunch grass maintained by frequent fire before sheep and cattle grazing. Although the grass appears abundant, it is a limited resource. Its growing season is short. Through the VCNP's limited grazing program, it feeds hundreds of cattle in the summer and thousands more of elk in the warm seasons and in drought winters, and during most of the year. Its nutritional value is low.

All content from Kiddle encyclopedia articles (including the article images and facts) can be freely used under Attribution-ShareAlike license, unless stated otherwise. Cite this article:
Valles Caldera Facts for Kids. Kiddle Encyclopedia.