Sandoval County is located in the U.S. state of New Mexico. As of the 2010 census, the population was 131,561, making it the fourth-most populous county in New Mexico. The county seat is Bernalillo.

Sandoval County is part of the Albuquerque metropolitan area.

A relatively small portion of the county exists as a geographically separate exclave between Los Alamos County and Santa Fe County. This came about when Los Alamos County was created; the land that became the exclave would have been part of Los Alamos but was excluded owing to its sacred status among the local Indians. Rather than be ceded to neighboring Santa Fe (or Los Alamos) it has remained part of Sandoval. 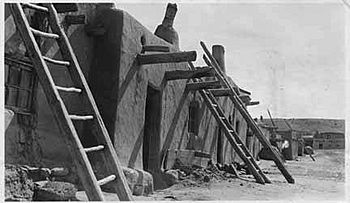 All content from Kiddle encyclopedia articles (including the article images and facts) can be freely used under Attribution-ShareAlike license, unless stated otherwise. Cite this article:
Sandoval County, New Mexico Facts for Kids. Kiddle Encyclopedia.