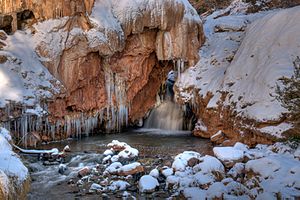 Jemez Springs (pronounced HEH-mes) is a village in Sandoval County, New Mexico, United States. The population was 375 at the 2000 census. Named for the nearby Pueblo of Jemez, the village is the site of Jemez State Monument and the headquarters of the Jemez Ranger District. The village and nearby locations in the Jemez Valley are the site of hot springs and several religious retreats.

Situated in the Jemez Mountains, Jemez Springs is located entirely within the Santa Fe National Forest. The village is sited on the Jemez River in the red rock San Diego Canyon. State Highway 4 passes through the settlement on the east bank of the Rio Grande tributary. Geothermal springs in and near the village feed the Jemez River. The village has a total area of 4.8 square miles (12 km2), all of it land.

The Jemez Valley is thought to have been inhabited for the last 4500 years. The Spaniards who visited the area beginning in 1540 reported multiple Native American pueblos (villages), in the valley. The Franciscan mission church San José de los Jemez was built just to the north of the current village in 1621 but was abandoned around the 1640s. Today the ruins are the site of Jemez State Monument. Following the Pueblo Revolt the Jemez people began converging at the current Pueblo of Jemez. In the nineteenth century the valley was given over to mostly agrarian and pastoral uses.

Jemez Springs' post office opened in 1907. The village is named for the Pueblo of Jemez twelve miles to the south. The 1907 post office was preceded by one established in 1884 named Archuleta. The village's current main bathhouse originates from this period.

In 1942, Jemez Springs was the second choice (after Oak City, Utah) for the location of the Los Alamos National Laboratory, the proposed Manhattan Project research laboratory, but Los Alamos was chosen instead.

In 1947 two Roman Catholic retreats were founded nearby, the Congregation of the Servants of the Paraclete and the Handmaids of the Precious Blood. The village was incorporated in 1955. Following enthusiasm from supporters of Kyozan Joshu Sasaki in 1972, the Bodhi Manda Zen Center, a Rinzai training academy, was founded.

There were 113 households out of which 34.5% had children under the age of 18 living with them, 58.4% were married couples living together, 8.0% had a female householder with no husband present, and 27.4% were non-families. 20.4% of all households were made up of individuals and 5.3% had someone living alone who was 65 years of age or older. The average household size was 2.63 and the average family size was 3.09.

All content from Kiddle encyclopedia articles (including the article images and facts) can be freely used under Attribution-ShareAlike license, unless stated otherwise. Cite this article:
Jemez Springs, New Mexico Facts for Kids. Kiddle Encyclopedia.