Numerous Puebloan Indian tribes have lived in the Jemez Mountains region since before the Spanish arrived in New Mexico. The Pueblo Indians of this region are the Towa-speaking Jemez people for which this mountain range is named, the Keres-speaking Keresan Indians, and the Tewa-speaking Tewa Indians. Tsąmpiye'ip'įn is the Tewa language name for the Jemez Mountains.

The highest point in the range is Chicoma Mountain (also spelled as Tschicoma or Tchicoma) at an elevation of 11,561 feet (3,524 meters). The town of Los Alamos and the Los Alamos National Laboratory adjoin the eastern side of the range while the town of Jemez Springs is to the west. Pajarito Mountain Ski Area is the only ski area in the Jemez. New Mexico State Highway 4 is the primary road that provides vehicular access to locations in the Jemez Mountains. 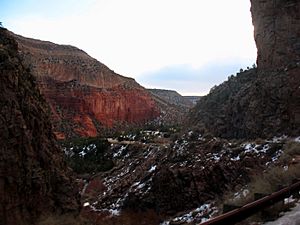 The Jemez Mountains lie to the north of the Albuquerque Basin in the Rio Grande rift. They are a classic example of intracontinental volcanism and consist of a broadly circular ridge surrounding the famous Valles Caldera. The latter is the type location for resurgent caldera eruptions.

The mountains lie on the intersection of the western margin of the Rio Grande Rift and the Jemez Lineament. Here magma produced from the fertile rock of an ancient subduction zone has repeatedly found its way to the surface along faults produced by rifting. This has produced a long-lived volcanic field, with the earliest eruptions beginning at least 13 million years ago and continuing almost to the present day, the most recent known eruption being the obsidian of the Banco Bonito flow, dated to 68.3 ± 1.5 thousand years before the present.

Most of the volume of the range is composed of pre-caldera basalts, andesites, and dacites of the Keres Group and Polvadera Group, but there are extensive outflow sheets of the Bandelier Tuff and young rhyolites associated with caldera resurgence, all assigned to the Tewa Group.

The two most recent caldera-forming eruptions, dated to about 1.62 million and 1.256 million years ago, produced massive ignimbrite deposits known as the Otowi and Tshirege members, respectively, of the Bandelier Tuff. Much of the material in these deposits now forms the Pajarito Plateau, a scenic region of canyons and mesas on which Los Alamos is situated. Redondo Peak, the second-highest summit in the range at 11,254 ft (3431 m), is a resurgent dome in the middle of the Valles Caldera, which also contains several smaller volcanos. The caldera is segregated by these structures and its rim into multiple lush grass valleys (valles in Spanish, hence the name). 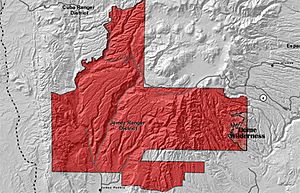 Much of the range is federal land, including Santa Fe National Forest, Bandelier National Monument, and the Valles Caldera National Preserve. State lands include Fenton Lake State Park at 35°52′58″N 106°43′46″W﻿ / ﻿35.88278°N 106.72944°W﻿ / 35.88278; -106.72944 in Sandoval County. Hiking trails crisscross the range and lead to many of the summits, although some regions are closed to hikers either because of environmental restrictions or because they are on the territory of Santa Clara Pueblo or private landholders. (Access to pueblo lands is available by permit.) The summits are generally easy to climb (in good weather) and require no technical climbing skills, but rock climbing is popular on some of the basalt cliffs near Los Alamos, Caja del Rio and elsewhere in the range. The mountains also are home to Pajarito Mountain, a small downhill ski area and offer some opportunities for cross country skiing, although not every winter produces enough snow to support this recreational activity. The region is prone to forest fires because of the tendency for spring weather to be dry and windy, creating conditions under which fires caused by human activities or lightning can spread rapidly. The Las Conchas Fire in 2011 was the most recent large wildfire. Parts of Los Alamos National Laboratory were also damaged, although none of the laboratory's special nuclear materials were threatened or released.

Census-designated places within the Jemez Mountains include Jemez Springs and Jemez Pueblo.

All content from Kiddle encyclopedia articles (including the article images and facts) can be freely used under Attribution-ShareAlike license, unless stated otherwise. Cite this article:
Jemez Mountains Facts for Kids. Kiddle Encyclopedia.