Los Alamos is a town in Los Alamos County, New Mexico, United States, that is recognized as the development and creation place of the atomic bomb—the primary objective of the Manhattan Project by Los Alamos National Laboratory during World War II. The town is located on four mesas of the Pajarito Plateau, and had a population of about 13,200 as of 2020. It is the county seat and one of two population centers in the county known as census-designated places (CDPs); the other is White Rock.

Los Alamos is built on the Pajarito Plateau between White Rock Canyon and the Valles Caldera. The first settlers on the plateau are thought to be Keres speaking Native Americans around the 10th century. Around 1300, Tewa settlers immigrated from the Four Corners Region and built large cities but were driven out within 50 years by Navajo and Apache raids and by drought. Both the Keres and Tewa towns can be seen today in the ruins of Bandelier National Monument and Tsankawi.

The land of the plateau was then divided up for homesteading. Most residents of the plateau built simple log cabins that they only lived in during warm weather to feed livestock, with the homesteaders moving down to the warmer Rio Grande Valley. Homesteader Harold H. Brook sold part of his land and buildings to Detroit businessman Ashley Pond II in 1917 which began the Los Alamos Ranch School, named after the aspen trees that blossomed in the spring. 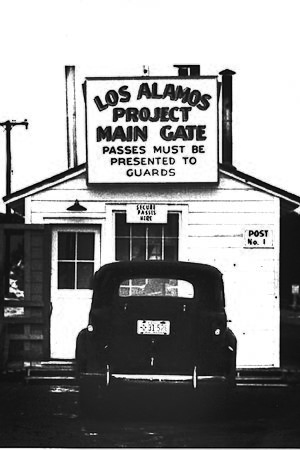 The Main Gate to Los Alamos during the Manhattan Project.

In 1942, during World War II, the Department of War began looking for a remote location for the Manhattan Project. The school was closed when the government used its power of eminent domain to take over the Ranch School and all the remaining homestead that same year. The Ranch School was paid $225 per acre; the homesteaders were paid between $7 and $15 per acre. All information about the town was highly classified until the bombing of Hiroshima.

All incoming truckloads were labeled as common items to conceal the true nature of their contents, and any outbound correspondence by those working and living in Los Alamos was censored by military officials. At the time, it was referred to as "The Hill" by many in Santa Fe, and as "Site Y" by military personnel. The mailing address for all of Los Alamos was PO Box 1663, Santa Fe, NM. After the Manhattan Project was completed, White Rock was abandoned until 1963 when people began to re-inhabit and rebuild new homes and buildings.

Los Alamos National Laboratory was established as a research government facility under the Department of Energy.

On November 10, 2015, the National Park Service and the U.S. Department of Energy announced the establishment of Manhattan Project National Historical Park in Los Alamos, along with units in Hanford, Washington and Oak Ridge, Tennessee.

The Los Alamos Townsite and White Rock are located on flat mesa tops separated by steep canyons. This location was chosen for its relative inaccessibility to help protect the secret activities of the Manhattan Project.

The town of Los Alamos was built on four mesas—Barranca Mesa, North Mesa, Los Alamos Mesa and South Mesa—along with the connecting communities at the base of the mountain. LANL occupies half of South Mesa, Two Mile Mesa, Frijoles Mesa, Mesita de Buey and several nearby areas in the region (in the valleys and at the base of the mountain). White Rock lies at the top of White Rock Canyon.

Much of Los Alamos County is within the Española Ranger District of the Santa Fe National Forest.

View from the Anderson Overlook.

Los Alamos has a humid continental climate (Köppen Dfb) with cold though not severe winters and summers with very warm days, cool nights, and frequent monsoonal thunderstorms. Its high altitude moderates summer heat and makes precipitation relatively high (twice as much as Albuquerque) but makes for a short frost-free season, with the last frost usually in May. Snowfall is quite heavy, but very little of it lies on the ground for long, with the median cover in January being 4 inches (0.10 m) and the highest monthly mean 14 inches (0.36 m) in February 1993, whilst temperatures below 0 °F (−17.8 °C) are very rare, occurring on an average of two nights annually.

Los Alamos' geographical location causes its wildlife and vegetation to be diverse compared to surrounding areas in the state. "The variation in elevation creates precipitation and temperature gradients that support a wide diversity of plant communities..." There are six different plant communities within the county; each is home to unique flora and fauna. Ponderosa pine trees are the most common trees at the elevation of Los Alamos (7,000 and 8,000 feet (2,100 and 2,400 m)). Common shrubs in the area include sagebrush, Gambrel's oak, and wild rose.

Black bears (brown-color variation), elk, bobcats, and gray foxes are examples of mammals living in the area. "Over 200 species of birds have been reported" in the Pajarito Ornithological Survey conducted by LANL. Among these are broad-tailed hummingbirds, hairy woodpeckers, zone-tailed hawks, common ravens, western bluebirds, and great horned owls.

Wildfires have affected the county, but the most destructive to the townsite was the Cerro Grande Fire of May 2000, which caused an estimated $1 billion in damages and destroyed more than 400 homes. The town was evacuated for eight days. The Federal Emergency Management Agency (FEMA) built temporary housing on North Mesa for those who were displaced by the fire. Though there was no loss of life, other effects include damage to LANL facilities (nuclear material was not affected), flash-flooding, and erosion. 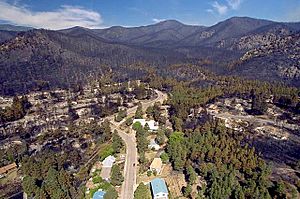 Aftermath of the Cerro Grande Fire of 2000

The Las Conchas Fire of 2011 burned about three times as many acres and also prompted evacuation of Los Alamos, but there was no damage to property in Los Alamos.

Wildfires have altered plant communities in the area. Plant species are migrating to cover burn areas.

Los Alamos is demographically unique compared to its surrounding counties and the state as a whole. Over 35% of the population of surrounding counties (Rio Arriba, Santa Fe, and Sandoval) and the state of New Mexico are Hispanic or Latino, while only about 15% of Los Alamosans are Hispanic or Latino. The white and especially the Asian populations of Los Alamos are significantly higher than the rest of New Mexico.

The geography of Los Alamos lends itself to several sports and recreational activities. Skiing is possible on 10,440 ft. Pajarito Mountain between November and April. Snowshoeing is possible at Valles Caldera National Preserve and other locations weather permitting.

Los Alamos is host to the following sporting events:

In June 2016 a collaboration was initiated between the County of Los Alamos, the Los Alamos Commerce & Development Corporation and the Los Alamos National Laboratory's Feynman Center for Innovation and Community Relations and Partnerships Office, to open a private, non-profit coworking space called ProjectY cowork Los Alamos.

The median household income in Los Alamos is $98,458, and per capita income is $54,067. Income is significantly higher than the rest of New Mexico. Los Alamos has the highest millionaire concentration of any US city, with 12.4 percent of households having at least $1 million in assets. This is a result of chemists, engineers, and physicists working at LANL since the Manhattan Project. Only 6.6% of people are below the poverty line; half the rate of the United States, and one-third the rate of New Mexico. As of January 2015, there were zero homeless individuals.

31.4% of households have children under the age of 18 living with them, 56.4% are married couples living together, 6.5% have a female householder with no husband present, and 34.0% are non-families. 29.8% of all households are made up of individuals, and 7.6% have someone living alone who is 65 years of age or older.

Los Alamos National Laboratory is the area's largest employer with approximately 10,500 employees, and is foundational to the economy of Los Alamos, with an annual budget of about $2.45 billion. Approximately 40% of the laboratory's employees live in Los Alamos, while the remainder commute from Santa Fe, Española, Taos, and Albuquerque. About 66% of the people who work in the national laboratories commute daily to the lab; some take the Atomic City Transit, Rail Runner Express, use the Park and Ride, or carpool with other employees.

Los Alamos Public Schools provides public Kindergarten through High School education (5 elementary schools, 1 middle school, and 1 high school). Education in Los Alamos is often said to be among the best in New Mexico. The graduation rate, as of March 6, 2021, is 99.3%, in comparison to New Mexico's 76.9% rate and America's average rate of 85%.

The University of New Mexico also has a branch campus in Los Alamos.

Los Alamos is relatively isolated, and can only be accessed from NM 4 from the south and NM 502 from the east.

NM 502 sees significantly more traffic because it connects with US 84/285, which delivers access to several Pueblo communities between Española and Santa Fe. Approximately 10,000 commuters use NM 502 daily. NM 502 begins at Pojoaque, and traverses San Ildefonso Pueblo and the Rio Grande.

Interstate 25 is the nearest major interstate highway, and passes through or near Santa Fe, Albuquerque and Denver.

There are three access roads between White Rock and Los Alamos—Main Hill Road, Jemez Road and Pajarito Road. Since the attacks of September 11, 2001, Pajarito Road has been restricted to LANL badge holders for security reasons.

Los Alamos County Airport, located on the eastern edge of Los Alamos, is the only airport in the county. The main source of activity is from small private aircraft, with intermittent commercial commuter service.

Albuquerque International Sunport is a 100 mile drive south of Los Alamos, and serves most national destinations.

All content from Kiddle encyclopedia articles (including the article images and facts) can be freely used under Attribution-ShareAlike license, unless stated otherwise. Cite this article:
Los Alamos, New Mexico Facts for Kids. Kiddle Encyclopedia.