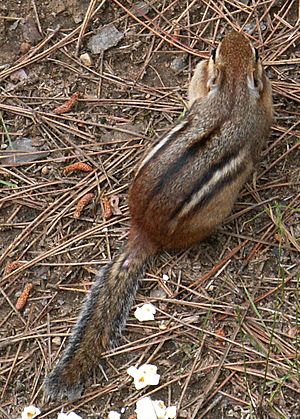 A chipmunk is a small squirrel-like rodent. It is in the Sciuridae family. About twenty-three species fall under this title, with one species in North America.

The name may have originally been spelled "chitmunk" (perhaps from a Native American word meaning "red squirrel"). However, the earliest form comes from the Oxford English Dictionary (in 1842) as "chipmonk". Other early forms include "chipmuck" and "chipminck".

Chipmunks are hoarders, meaning they store food for winter.

All content from Kiddle encyclopedia articles (including the article images and facts) can be freely used under Attribution-ShareAlike license, unless stated otherwise. Cite this article:
Chipmunk Facts for Kids. Kiddle Encyclopedia.