The alpine chipmunk (Neotamias alpinus) is a species of chipmunk native to the high elevations of the Sierra Nevada of California.

Alpine chipmunks share the typical pattern of genus Neotamias, being gray-brown overall and featuring three white stripes on the cheeks and four down the back. The flanks are muted orange. Overall the pattern is much paler compared to most species. They weigh 27-45 grams. 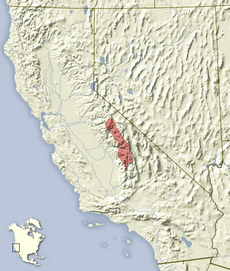 The alpine chipmunk feeds on the seeds of sedges, grasses, and other plants in their namesake alpine zone. They generally eat their food on the ground. They do not generally require a source of water other than food, but will use it given the opportunity.

They nest in crevices between rocks, taking advantage of the micro-climatic conditions (i.e. higher temperatures) that exist there. Their young are born in June and July, in litters of 3-6.

They are considered diurnal, though they exhibit some nocturnal activity during the summer. They hibernate from November through April, frequently awakening to eat.

All content from Kiddle encyclopedia articles (including the article images and facts) can be freely used under Attribution-ShareAlike license, unless stated otherwise. Cite this article:
Alpine chipmunk Facts for Kids. Kiddle Encyclopedia.