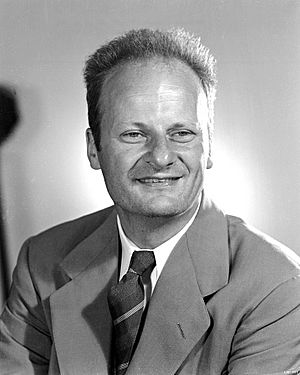 Hans Albrecht Bethe (July 2, 1906 – March 6, 2005) was a German-American nuclear physicist who made important contributions to astrophysics, quantum electrodynamics and solid-state physics, and won the 1967 Nobel Prize in Physics for his work on the theory of stellar nucleosynthesis.

For most of his career, Bethe was a professor at Cornell University. During World War II, he was head of the Theoretical Division at the secret Los Alamos laboratory which developed the first atomic bombs. There he played a key role in calculating the critical mass of the weapons and developing the theory behind the implosion method used in both the Trinity test and the "Fat Man" weapon dropped on Nagasaki in August 1945.

After the war, Bethe also played an important role in the development of the hydrogen bomb, though he had originally joined the project with the hope of proving it could not be made. Bethe later campaigned with Albert Einstein and the Emergency Committee of Atomic Scientists against nuclear testing and the nuclear arms race. He helped persuade the Kennedy and Nixon administrations to sign, respectively, the 1963 Partial Nuclear Test Ban Treaty and 1972 Anti-Ballistic Missile Treaty (SALT I).

His scientific research never ceased and he was publishing papers well into his nineties, making him one of the few scientists to have published at least one major paper in his field during every decade of his career – which, in Bethe's case, spanned nearly seventy years. Freeman Dyson, once one of his students, called him the "supreme problem-solver of the 20th century".

All content from Kiddle encyclopedia articles (including the article images and facts) can be freely used under Attribution-ShareAlike license, unless stated otherwise. Cite this article:
Hans Bethe Facts for Kids. Kiddle Encyclopedia.