University of Manchester facts for kids 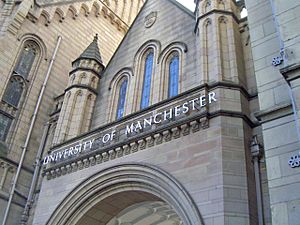 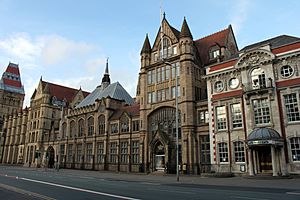 The University of Manchester is a public university in Manchester, England. In 2007-08, it had over 40,000 students studying 500 academic programmes, and more than 10,000 staff and an annual income of £637 million. It is the largest single-campus University in the United Kingdom. The university was formed in 2004 by joining together the Victoria University of Manchester (founded 1851) and UMIST (founded 1824) and since then some of the buildings have been demolished and new ones built instead. These include University Place on the site of the former Mathematics Building (pictured right).

The former UMIST buildings are in the Sackville Street Campus and those of the former University of Manchester in the Oxford Road Campus. There is a residential campus further south in the suburb of Fallowfield. The earliest buildings of the university date from 1872 (west of Oxford Road) and they were occupied by Owens College in 1873. Since the 1950s the facilities for science and technology have occupied an area east of Oxford Road and the medical school was relocated there in the early 1970s. 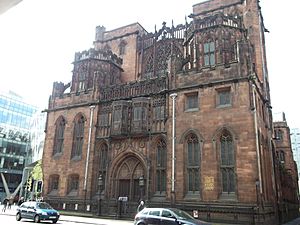 The main library is on the Oxford Road Campus of the University and the special collections are in the John Rylands Library, Deansgate, in the city centre. The Library is a National Research Library (an award of the Higher Education Funding Council for England): the only one in the north of England. 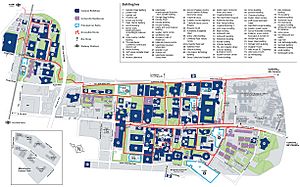 All content from Kiddle encyclopedia articles (including the article images and facts) can be freely used under Attribution-ShareAlike license, unless stated otherwise. Cite this article:
University of Manchester Facts for Kids. Kiddle Encyclopedia.