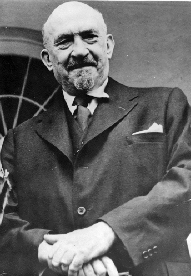 Weizmann came to the University of Manchester in 1904, where he lectured on chemistry. During World War I, the British forces needed to increase the production of artillery shells. The production was limited by a shortage of acetone, needed to produce cordite. Cordite was used to propel (fire) shells and bullets to their targets. Weizmann developed a production of acetone from the anaerobic fermentation of maize and horse chestnuts by bacteria. As a result, the production of shells rose from 500,000 in the first five months of the war to 16.4 million in 1915.

Weizmann was President of Israel from 1948, and he died in 1952. He had worked for years to get agreement for the Israel.

All content from Kiddle encyclopedia articles (including the article images and facts) can be freely used under Attribution-ShareAlike license, unless stated otherwise. Cite this article:
Chaim Weizmann Facts for Kids. Kiddle Encyclopedia.